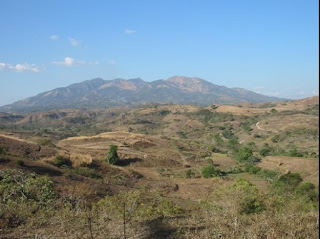 Northeast of San Salvador lies the ancient Guazapa volcano. Over the past 10 years, many of my visits have involved spending time in communities around the volcano. During El Salvador's civil war, this was a battle zone.

Three documentaries pull together a view of Guazapa then and now. Dr. Charles Clements had been a US Air Force pilot in Vietnam before he left the military, and became a Quaker and a doctor. Clements then spent a year behind FMLN lines in Guazapa treating civilians needing medical care in the war zone. The Academy Award winning short documentary, Witness to War, is based on his memoir of the same name.

While Clements was working behind the lines in the Guazapa region, he was visited by American journalist Don North. North also spent time behind the FMLN lines, interviewing the guerillas, seeing how people lived, and documenting the impact of attacks by the US-supplied armed forces. North then produced the documentary Guazapa: The Face of War in El Salvador.

Twenty-six years later, North and Clements returned to the area around Guazapa to see for themselves the changes in El Salvador since the signing of the peace accords in 1992. Those changes culminated in the election of the country's first FMLN president, Mauricio Funes in 2009. The documentary North produced is titled Guazapa: Yesterday's Enemies.

The trailer for Yesterday's Enemies:

I recommend Yesterday's Enemies to anyone planning a visit to El Salvador as part of a delegation or who wants insights into how the country continues to emerge from the madness of its civil war. There is information on how to order Yesterday's Enemies, as well as The Face of War at the website of North Star Productions.

For those of you in the southeast Wisconsin area, there will be a screening of Yesterday's Enemies and The Face of War on Monday, February 22, as part of the El Salvador Movie Night series at St. John's Lutheran Church, 20275 Davidson Road, Brookfield, Wisconsin 53045.
History Movies/Video

jmw said…
Tim, apologies for not commenting particularly about the subject matter of this post. I just want to tell you that I've recently come back from El Salvador and stumbled upon your blog while searching for ways to stay connected with what is happening in the country. This blog is amazing, please keep up the great work. Your posts are informative and overflowing with recources. You hyperlink like a pro! haha Much peace to you. - josh
8:32 AM

kate said…
Responsible Mining Panama Petaquilla Copper MineThe increase in costs at Petaquilla comes as the mining industry around the world deals with rising costs and is the second project in recent months Teck has been involved in to see its expected price soar.
4:26 AM

superman said…
Go to the testimony of Dr.Francisco Acosta in San Francisco in 2004.Put in those key words I just mentioned in Google and then you can understand the empowering nature of the road to Jeses.I returned from his University in Sachitoto.Mario Murillo has Dr.Acosta on his WBAI radio show in New York City.Mauricio Funes was his classmate in 1980 when school of the americas trained Roberto D'Aubisson was anointed by Reagan.Follow the procession of the FMLN and your hope will soar.Join us by contacting Dr.Acosta at Peaceint.org...Peace and blessings, Tom
3:47 PM

superman said…
The Acosta family left 83 family members dead or disappeared.Only God can decide the size of the cross you can bear in this life.Pick up yours and and through the eyes of Marti,see the new Guazapa.I lived in Hawaii for 22 years and Costa Rica for 12 and I decided to give my all to the Funes procession that will be like a slow cumbia.Wecome with smiles and happy feet.Tom"Superman"
3:55 PM

superman said…
My gentle friends,I will be in New York City next week and will be asking WBAI:the 100% listener-sponsored free speech radio station,permission to create a program that would be at the pleasure for the new administration in El Salvador.As presenter and facilitator,I ,of couse would yield,to the advocates, namely Dr.Francisco Acosta Arevalo and his classmate from Univ. of Central America, Mauricio Funes.Stay tuned.Tom "Superman"
5:32 AM