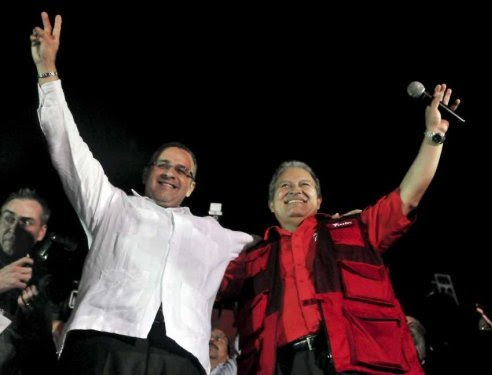 During his presidential campaign, Mauricio Funes always dressed in a white shirt, while his running mate for vice president, Salvador Sánchez Cerén always wore the red of the FMLN. The message was clear -- Funes was distancing himself from the traditional hard-line FMLN of Sánchez Cerén. As president, Funes is finding he still needs to draw those distinctions.

Sánchez Cerén was in Venezuela at the end of November for the First International Gathering of Parties of the Left, and the Extraordinary Congress of the United Socialist Party of Venezuela. In a speech to the assembled socialist partisans, Sánchez Cerén strongly supported the program of Hugo Chavez to create a Fifth Socialist International and spoke against the "imperialist" designs of the United States. El Salvador's vice president stated:

The peoples of Latin America must unite because the Empire has a desperate attitude of wanting to return to rescue its presence on the continent, but the aspiration of peoples is to want to change towards a different route.

These public pronouncements of Sánchez Cerén led Mauricio Funes to publicly differ with him, stating that the government of El Salvador neither shares nor supports the views of the FMLN pronounced in Caracas. In response, Sánchez Cerén told the press that he had been speaking only in his role as a senior official of the FMLN, and not in his role as the vice president. He acknowledged that only the president could set the course of the foreign policy of El Salvador.

For its part, there is no doubt that the official policy of the FMLN is to support the creation of a Fifth Socialist International, as described in a recent statement on the party's website, where the party committed itself to advance principles of democratic socialism.
FMLN Funes US relations

George Fulmore said…
The cold war is over. Read "The Lexus and the Olive Tree" to understand what the current would is all about. It's not about red vs. white. That is over. It's about globalization and competition. It's about understanding how the "centrist" political view is best for a country. The U.S. is broke and the Soviet Union is not coming back. It's time for El Salvador to move forward, not cling to retoric of the past.
4:24 PM

ixa said…
Sorry George, up until March, El Salvador has been clinging to the rhetoric past for the last 25 years.
They wanted change and got it.
Funes wants to focus on El Salvador and it's problems, he does not want to focus on what other people think of El Salvador and what outsiders think is best for the country.
He is 100% Salvadorenyo de corazon and does not see through tinted red glasses like most stuck in cold war era thinking would believe. The left has evolutionized. The FMLN knows this and is constantly controlling their hardline tendencies because they know they that to :slim down" as in diet coke style, is the best for them to grow as a group-and follow Moderate Funes.
9:08 AM

George Fulmore said…
I'm still reading "The Lexus and the Olive Tree," which I highly recommend to better understand how globalization affects El Salvador and other such countries. In a part of the book I just read, he says that it was only because of the cold war mentality that the U.S. got involved with countries such as Viet Nam and El Salvador. They were pieces on the checkerboard of the cold war. That was the only reason that they were important for the U.S. at the time. Thankfully, that game is over. Now El Salvador and other countries compete against each other for funds from international entities that have no politics, only money for investments. Borrow from them, and they set the rules, based on your ability to repay and behave. (As I study Spanish, I think my English is getting worse!)
12:55 PM