On November 16, 1989, that same fateful day in El Salvador when the Jesuits were murdered, Lutheran Bishop Medardo Gomez was also targeted by the military. For Bishop Gomez and his Lutheran church were also voices who denounced the injustice they saw in Salvadoran society. They were deemed to be subversives by the government for siding with the poor and doing such radical things as operating a refugee camp for families fleeing the armed conflict, or for teaching the poor that they were entitled to equal human rights with the rich and powerful.

You know the government's view of your church when it sets up a machine gun post directly across the street from your church, your church named Resurrection Church – the church of Easter, and the machine gun is always aimed at the front door of the church.

A few weeks before November 16, 1989, in a special service of reconciliation, the congregation of Resurrection Lutheran Church in San Salvador was asked to lay the sins of their country upon a symbolic cross. A simple wooden cross, painted white, was placed at the front of the church. In ones and twos, congregation members came up to the cross, took a black marker, and wrote the sins on the cross, such as persecution of the church, hunger, discrimination against women, ambition for power, murder and violence. As they identified the sins of their country and their people, they also committed themselves to work toward forgiveness, and to be strengthened for liberation. The cross also carries messages of hope and love, as a testimony to the transforming power of God. After the reconciliation service, the cross remained as a symbol within the church.

On the same day when the six Jesuit priests were murdered by elite Salvadoran troops, soldiers arrived at Resurrection Church looking for Bishop Gomez. Their search did not find Bishop Gomez, but they did find that simple white cross. Bishop Gomez had managed to flee and get to safety in the German embassy and subsequently found refuge in Milwaukee. Rather than capturing the bishop, the troops arrested 15 people, and took possession of the cross and took it away to the army compound. Presumably the soldiers thought this cross was evidence of the subversive activity going on in the Lutheran church. 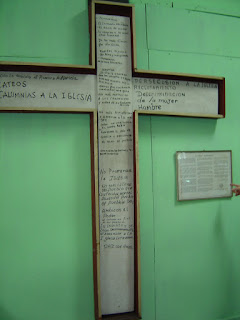 And as the Salvadoran Lutheran Church tells the story, the cross, with its powerful words, bore witness to those army troops as it stood in their barracks. It spoke to their hearts about the sins committed by the army during the civil war.

Following his return to El Salvador, Bishop Gomez and international partners petitioned the government for the return of the cross. And with some assistance from the US Ambassador, the cross made another journey – this time from the army quarters to the presidential residence, El Salvador's White House. And the cross continued to bear silent witness regarding to the evil and the need for reconciliation in El Salvador – this time in the seat of power of the country.

Finally the call came, the president of El Salvador, Alfredo Cristiani, a man from the political party which sponsored the death squads, wanted to return the cross. And Bishop Gomez received the cross back to Resurrection Church, where a picture of Cristiani with the bishop hangs by the cross.

Today that cross, the "Subversive Cross," continues to have a powerful significance. Many, many people who have traveled to El Salvador and visited Resurrection Church have learned the story and have been inspired by this simple white cross and all it symbolizes. On the twentieth anniversary of the soldiers taking the cross into captivity, the Salvadoran Lutheran church turns once again to the Subversive Cross to inspire and guide its work struggling for justice for the poor and dispossessed in Salvadoran society.
History Lutheran church

Jon said…
Ah, I remember Medardo... Without downplaying the good work that the Lutherans did (and no doubt still do), a more nuanced account may perhaps be in order.
1:49 PM

Unknown said…
What kind of nuance is Jon looking for, pray-tell?
9:40 AM

Abby410 said…
Please tell me what is written on the cross in English. I wanted to share it with my congregation. Thank you for your blog post. I learned a lot. God bless. Pastor Marla W Brock
7:59 AM

Abby410 said…
What is the translation of what appears on the cross. I was hoping to share it with my own congregation. Thank you for your insightful and informative post.
8:00 AM

Center:
Social Injustice
The disrespect to the reason (for truth)
The abuse of power
The violation of human rights
No more love, ambition
Unjust deaths
To be poor and marginalized
Incomprehension – we aren’t sincere
Injustice
God, we confess the sins of the poor that suffer from violence
We want peace with love. That the Lord may guide us
No more slaughters of the farmers and children of El Salvador
No more exploitation and oppression of women
Lord, no more war among our people
To announce the year of grace and proclaim the reign of justice
That the wars end and commerce begins

To not profane the church
No more searches of the people by the
authority, the end of the abuse against the
people, the people of God
Ambition for power
El Salvador is faithful to her people
The unjust and indiscriminate military attacks against the Lutheran Church