More on November 2009 flooding and mudslides

Five departments most affected by rains and flooding, put on orange alert by Salvadoran authorities.

The death toll has risen to at least 100 according to EDH. That would make this the worst natural disaster in El Salvador since Hurricane Stan in 2005. 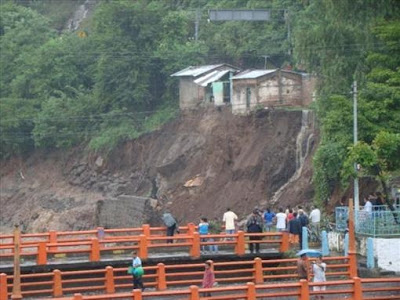 Landslide near San Vicente
Some of the worst mudslides are reported in the town of Verapaz located in the folds of the San Vicente Volcano, also known as Chichontepec volcano. As 14 inches of rain fell on the area, water and mud came pouring down the sides of the volcano. According to El Diario de Hoy, there has been an 8 kilometer long landslide and entire neighborhoods are under the earth. Also in that vicinty, the river Acahualpa swept away some 30 houses from the communities Dos Puentes and La Caridad (also known as El Zope). In the department of San Vicente as of 1:00 pm Sunday, November 8, there were reported 25 deaths and 40 missing.

Cairo The Boxer said…
I just came across your site. Really cool! Keep up the great work :)

I really love El Salvador and think it's a great place to visit.