Flooding and mudslides kill more than 90 in El Salvador 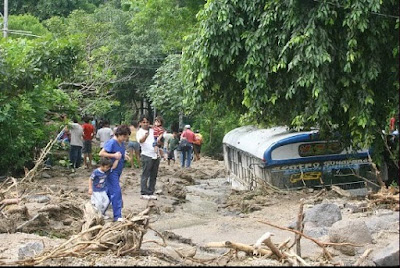 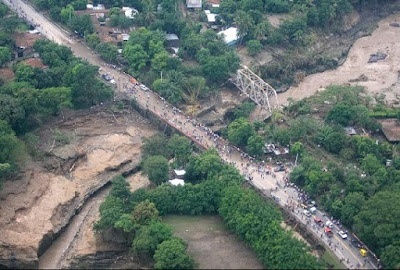 At least 60 people were reported missing, and authorities warned that the toll could rise as rescuers reached hard-hit zones that remained cut off by floodwaters and landslides. About 7,000 people were evacuated and scores were plucked from flood zones by helicopter, Interior Minister Humberto Centeno said.

The impoverished nation of 5 million was pelted by three days of rain attributed to "a disturbed weather area" off the Pacific coast of El Salvador, according to the Miami-based National Hurricane Center. Meteorologist Dennis Feltgen said the heavy rains were unrelated to Hurricane Ida, which earlier sideswiped the region as a tropical storm over the western Caribbean.

Salvadoran authorities reported flooding in the capital, San Salvador, and rural areas to the east. Some of the worst damage was reported in the eastern province of San Vicente, a farming region where authorities said many residents remained cut off from communication.

A radio journalist who reached Verapaz, a town of 6,000 in that region, reported seeing dozens of people desperately searching for relatives missing amid homes buried by landslides after a river spilled over its banks. Carlos Lopez, a Red Cross spokesman, said 300 homes in Verapaz were "semi-destroyed."

Lopez said hundreds more rural dwellers were cut off in the southern province of Usulutan. Many took refuge on the rooftops of their shanties. Rescue workers were having a hard time reaching the area because of landslides that blocked highways.

According to El Faro, this is the most intense rain El Salvador has received in more than a decade. In San Vicente, 355 millimeters of rain fell in 24 hours from Saturday to Sunday (14 inches), while during the destructive Hurricane Mitch in 1998, there was 600 millimeters of rain spread out over three days.

Images of the devastation:
Look for another update here later tonight.
Natural disasters

Don Plummer said…
I just wrote to some of my friends in El Salvador to see how they're faring. They're in Santa Ana province, which apparently is east of the most seriously affected areas. I hope they are all safe.
6:35 PM