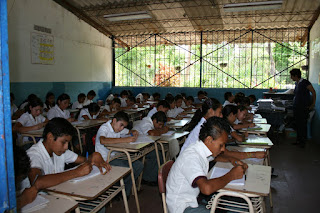 For many Salvadoran families, although the government provides a free public education, the cost of schooling still keeps kids from class. This is so because schools require that students have school uniforms, shoes and school supplies. There may be additional cost if a student needs transportation to get to school.

The new FMLN administration in El Salvador is following through on a campaign promise to lower those costs. From an update from CISPES:

On August 24, Vice-President and Minister of Education Salvador Sanchez Cerén officially opened the bidding process for some 7 million yards of fabric for the production of school uniforms, as the first step towards implementation of President Mauricio Funes’ plan to distribute two school uniforms, one pair of shoes, and a set of school supplies to every public school student in the country. The program will not only benefit 1,360,000 students, but will also create jobs for small- and medium-sized Salvadoran businesses. Fabric will be purchased from Salvadoran businesses and production will be carried out at a local level, with each municipality contracting local businesses and collectives to make the uniforms for their students.

Sanchez Cerén also inaugurated the expansion of the school meal program at a public school in the town of Soyapango this past August. The previous school meal program was limited to rural areas with high incidences of poverty, whereas the newly extended program includes students in impoverished urban areas as well. An additional 452,856 students in kindergarten through ninth grade in 764 schools will benefit from the expansion, raising the total students participating on a national level to 1,310,286 at 4,931 schools. The school meal program provides a daily serving of rice, beans, oil, sugar, milk, and a fortified drink to students.

As noted on the Hunnapuh blog, this ambitious program attacks numerous problems in the country -- the economic crisis, the lack of opportunities, students dropping out of school and puts Salvadorans in charge of making the changes necessary to improve their country. By contracting locally to make 2.8 million school uniforms, 1.4 million pairs of shoes, and 1.4 million packets of school supplies, the new government has launched a home grown economic stimulus program.
Education Funes

Economies of scale, anyone?

I am reminded of China under Mao: "local" towns were imposed steel quotas. Government apparatchicks confiscated peasant's iron and steel tools and melted it all in local kilns.

The scrap was absolutely useless and millions died the next winter, because without tools you cannot properly farm and harvest.

Point is, these commie schemes for "local" stuff are born of ignorance, backwardness, and naïveté.
11:03 PM

Unknown said…
Recently I found College Information which offers both Associate of Occupational Studies and Associate in Applied Science degree programs. The programs of study are listed below, Business, Health Disciplines, and Criminal Justice Computer Technology. You can also Visit.
4:38 AM

Miguel said…
I think facilitating school enrollment is always a good thing, but two comments:
1) The governments of Nicaragua and Guatemala did the same thing in the past few years with new governments, and schools there were paralyzed by massive overenrollment since the government did little to prepare (or fund) new classrooms, teachers, or schools to handle the surge. I hope the same mistake isn't happening in El Salvaador
2) I fail to see how making school uniforms in a presumably one-shot deal with provide anyone with new or sustainable "jobs" - it might mean a nice comission for a few businesses, but I wouldn't call ita stimulus plan...
7:20 AM

Joe said…
Yeah, whenever I hear the word "local" I think of communists too.

Unknown said…
I'm happy the government is investing in education. In my opinion, education is the key to a better society. Hope to see positive outcomes of this plan :)
4:04 PM