December 18, 2008
There is a new issue leading the ARENA government and its allies in the big media outlets to suggest the population should fear the FMLN. Government officials have recently asserted that 40 "armed groups" are organized throughout the country, particularly in areas which had been controlled by the FMLN guerrillas during the civil war. The controversy erupted with the December 14 edition of the right-wing newspaper El Diario de Hoy which ran a cover story with the headline "FMLN sponsors armed groups" 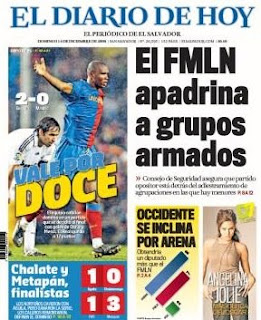 The article quoted government officials asserting that there were 40 armed groups in the areas which were controlled by the FMLN during the civil war. It asserted that the armed groups were being trained to use AK-47s and other weapons. The article included photos which appear to show a uniformed group of approximately 15 uniformed individuals, holding weapons in formation before a platform where FMLN officials sat. The paper stated that the picture was taken on October 25 in El Paisnal. 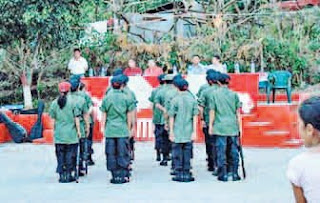 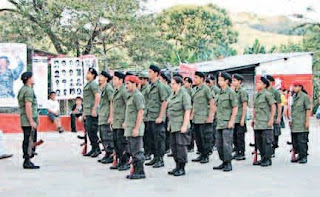 Then for the next three days, El Diario de Hoy, had banner headlines about these supposed "armed groups" 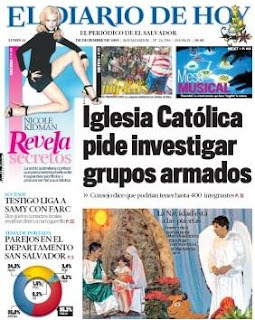 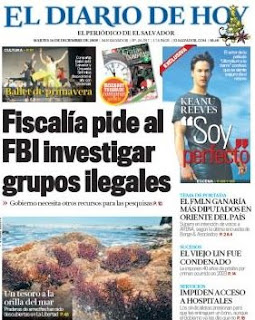 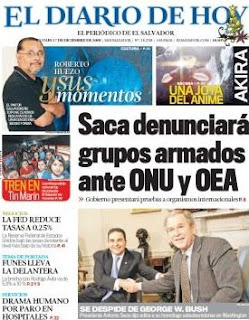 "Saca will denounce armed groups before United Nations and Organization of American States"
But the articles in EDH and its photos appear to not have told the whole story. Persons from El Paisnal assert that these are picture of an annual drama to commemorate a fallen guerrilla leader, and the guns in the pictures are plastic toys. The AP had a community leader show them the plastic guns: 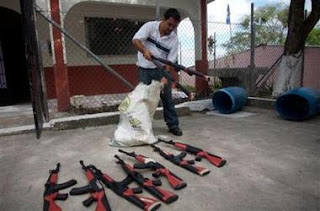 Wilfredo Cruz, leader of the community of Dimas Rodrigez, shows plastic AK-47 assault rifles that were used during a ceremony in honor of a late guerilla leader in El Paisanal, El Salvador, Tuesday, Dec. 16, 2008. The National Security Council of El Salvador is accusing the community of Dimas Rodriguez of arming and training young men. The community says that the accusations are politically motivated and that they were simply celebrating an act with toy guns to remember Dimas Rodriguez, a guerrilla leader from the Farabundo Marti National Liberation Front (FMLN) who fought and died in this region during the 1980-1992 civil war. (AP Photo/Edgar Romero)

Despite this relatively innocent explanation of the pictures (one can debate whether youth should be marching around even with replica AK-47s), government officials from the president to the head of the PNC and the attorney general have continued to assert there are armed groups posing a danger to the country, yet they have been slow to produce any proof of their assertions. It has not been diificult for many to assume that this "alert" about armed groups is simply another election ploy to attempt to make voters fear the FMLN.

At least some voters were made afraid this week, but their fear was not from clandestine cells of FMLN fighters, but of the unexpected arrival of more than 100 armed Salvadoran army troops in their neighborhood. As the Sister Cities website describes:

This morning, three large trucks carrying a total of 150 soldiers armed with heavy artillery entered the community of El Papaturro, in the zone of La Bermuda, Suchitoto. The soldiers have set up a military camp and said that they will be in the community for the next three days doing "military maneuvers." The mayor of Suchitoto has called the police and regional military base, and has been given no further information about the soldiers. (more)

This area had been mentioned in the EDH articles as a place where armed groups were operating. In La Prensa Grafica, the army described the troop movements as simply "routine exercises." That explanation did not work for the mayor of Suchitoto. ContraPunto put a recorded interview with the mayor on its website. The mayor pointed out that the Army never coordinated with him for these "routine exercise." He said the people in the region were surprised by the sudden arrival of the troops and fearful to go out. The mayor dismissed the idea that any armed groups were operating in the region and noted as well the low crime rate which Suchitoto enjoys.
2009 Elections ARENA FMLN

Anonymous said…
Disgusting. Why in the world should any Salvadoran now vote for the ARENA candidate, after such a nefarious campaign of dishonor and deception? Doesn't this tell us more eloquently than anything Funes could do and say why ARENA's power is premised on an unscrupulous and cynical view of how to manipulate the electorate? This is Saca's lowest, most dastardly and brazen cynical ploy and it begs an entire reevaluation of his whole presidency. The die is cast as far as I'm concerned: to coin a phrase, "No way, no how, no ARENA!"
10:44 AM

George Fulmore said…
I'm living in San Salvador now and through February. I'm really impressed by your site. Talking to folks here, most, I think, see the FMLN winning in March. The parallels between the election here and in the U.S. seem striking. A "problem" is having all voting done on the same day. Seems like this can encourage corruption and tension. Much better, I think, to allow early voting and mail-in.
7:21 PM

Anonymous said…
And what about the right wing armed groups that never went away?
8:20 PM

Anonymous said…
I have been thinking the same thing that Larry just mentioned. Hasn't there been rumors about right-wing armed groups and even government's own illegal armed groups? What's the update on those?
11:07 AM

Hodad said…
no one with any sense or education reads that rag, only the comic page is worthy and 'Trucutu' is all there is to read,oh, and the Phantom
not even the classifieds

now with the colored ink, it is not even worthy to wipe one's a..

right on Larry, however those groups have ceased or really desisted another lie from the rightwing, I read synopsis on this
any groups such as these now, would really make it worse for ARENA
as now the whole Latin world and on the web are watching,reading and informed

any so called death squads are not operating it seems as they also have families that know whatz up
finally
all are affected by the economic turndown and mainly all now know the reasons, too much arrogance, greed and military profiteering, para nada
best to be in ES when Pakistan fires off the first nuke, Coriolis effect winds, fruit and nuts will keep us alive, only place in Northen Hemishpere, Chiapas south

Anonymous said…
This is typical coming from ARENA party, as a salvadorean i am impressed on how the arena campaign turned out, and angry at the same time cause this only shows how stupid and ignorant THEY THINK WE ARE! the more they are doing this the more ppl are turning back on them! SHAME ON THEM!
4:09 PM