November 09, 2008
In 2006, Violeta Menjivar narrowly won election as mayor of San Salvador, by a margin of 61 votes over the ARENA candidate. She is running again as the FMLN's candidate to run the country's largest city, but a recent poll shows that her prospects of being re-elected may be up in the air. The poll was conducted by the Technological University of El Salvador (UTEC) and released on October 28. 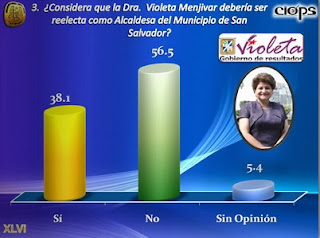 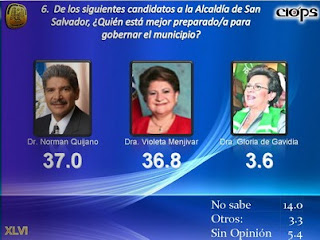 When asked who is best prepared to govern El Salvador, Menjivar and ARENA's candidate Norman Quijano, virtually tied in the poll results. 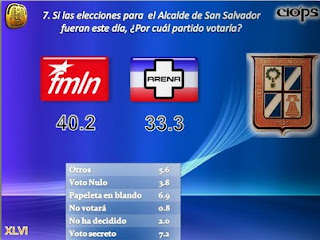 In addition to Quijano and Menjivar, two other candidates have been nominated by their political parties, Celina de Monterrosa for FDR, and Gloria de Gavidia for PDC.
2009 Elections

Jorge Ávalos said…
The wide margins in the UTEC's polls are somewhat questionable, in my opinion, whether they favor the FMLN or ARENA, as in this case. My reason is simple: the margin of the undecided or of those who choose not to answer is way too narrow. I've never seen that before. That margin should be, at this time, somewhere between 16 and 20%, given the electoral history of El Salvador.
3:09 PM

Basta de Casaca said…
Hi Tim, check this out..
It's related to the dirty campaign and illegal tactics that ARENA is using against the FMLN:

Here's the news from Diario Colatino too:

Too bad that kind of news never makes it to the right wing media: TCS, El Diario de Hoy or La Prensa Grafica.

It appears that this happened last night. Now there's evidence of the terror campaign run by ARENA.. How are they going to justify that now?

ARENA is getting desperate.. they seem to know that they are going to lose the nexty presidential elections, and they can't cope with it.
8:21 PM