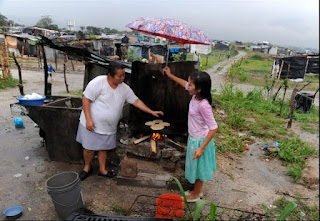 Today is Blog Action Day 2008, when bloggers all over the world are writing on a single topic. This year the topic is poverty.

I've written recently about poverty in El Salvador with all the statistics. But statistics often don't move people to action in the same way that pictures and human stories do. So I'd like to revisit again the situation of the marginalized community in Soyapango named "Benediction of God," I first wrote about it in my post Casas de Carton.

Salvadoran photographers have documented the difficult lives of the families who live in this community. One example is this essay from photojournalist Jesus Flores titled Life on the Edge in El Salvador. You can also view this photogallery from El Faro titled Sacrificing for a Roof.

This community is emblematic of the poverty which continues to exist in El Salvador. While many have risen out of extreme poverty through the receipt of remittances, through being fortunate enough to find a job in the formal economy, or through simple hard work, too many have not. Let these images commit everyone who reads this blog to take some step to advance the cause of the poor in El Salvador -- make a donation, build a house, advocate for economic justice, walk in solidarity with poor communities. Just do it.


According to Habitat for Humanity of El Salvador, the country has a housing deficit of some 360,000 dwellings.

Anonymous said…
Great post, Thank you for sharing, I myself wrote about it here: http://www.guruofsales.com/general/427/fight-poverty-its-blog-action-day-today and got a huge respond from readers and other bloggers. Would you please honor us and share your thoughts by leaving a comment on our post? I am trying to come up with something new tomorrow and I will include and encourage readers to visit your blog back so we can all unite to fight poverty.
8:43 PM

Anonymous said…
Hey man: I live in El Salvador, and the issue of the poverty in my country is a wall that must be broken. I think that is gonna take some years to do this, because to get a child out of the poverty trough education is gonna take some time as i said. We most be patient, and of course i agrre about help them whit houses, food, etc. ( I apologize for my english)
GOD BLESS EL SALVADOR
10:55 PM

Kadmiel said…
agreed this is great it can really help get the message out but what can i do to help as well ?
12:41 PM