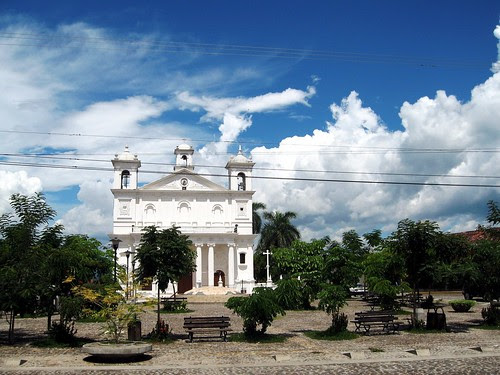 Another article in a major North American newspaper is featuring Suchitoto. Here are some excerpts from the story in the Baltimore Sun:

Suchitoto, in the center of the country, and less than an hour from the capital city of San Salvador, is the jewel in the burgeoning tourist crown. Many visitors come for the handicrafts and culture, as well as the town's restaurants and beautiful views of Lake Suchitlan.

The Santa Lucia church, blindingly white in the central plaza, is one of the finest examples of colonial architecture in the nation. On three sides of the plaza are covered porticos with cafes, a large hotel, a trendy bar and an Internet coffee shop - the town's first - as well as a daily artisans' market set up under colorful orange tents.

Suchitoto's nascent arts movement is picking up steam. The flat, cobblestone streets are home to small boutiques, galleries and craft stores staffed by entrepreneurs who have come home to capitalize on what could be the area's salvation: tourism....

There are so few places, so easy to get to, where tourists are still seen as something out of the ordinary. Where the locals seem genuinely happy to have you there. Suchitoto is one of these places. In the ranks of colonial Latin American destinations, this gem of a town sits at the back of the pack, politely waiting its turn to be "discovered." But go now, so you can say, "You should have seen it 25 years ago." (more)

Joe said…
I visited Suchitoto in 2005. I'd love to go back someday. We had a good time... we had lunch & dinner at a couple of nice restaurants (including the one with the great view of the lake), we had a fun night out at a nightclub, and so on. There was a spirit or vibe in the city that was appealing... there were young people there who love the city and were working to make things better.
2:16 PM