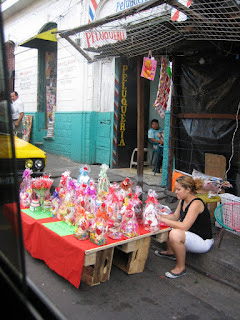 Last week the United Nations Development Program issued an important report for understanding the economic situation facing El Salvador's families. The Report of Human Development in El Salvador 2007-08 presents a comprehensive overview of the job situation in the country:

El Salvador is a country of workers. Not only because almost everyone has to work in order to earn their daily sustenance, but also because of the fame of its inhabitants as workers. The industriousness and enterprising nature are so deeply rooted in the Salvadoran identity that more than half of the population considers that "to be Salvadoran" is to be hard working.

However, the work situation is far from being satisfactory for the majority of persons. This report has determined that when the greater part of the population complain that the country is either bad or very bad with respect to employment, it refers to the fact that there are very few opportunities for "dignified work." Dignified work is a privilege enjoyed by less than 20% of the economically active population. For the rest, 7% haven't found employment and are unemployed, 43% have opted for underemployment and the other 31%, although they receive incomes in excess of the minimum wage, do not cover the cost of basic food basket at market prices, while not enjoying coverage of social safety nets.

Among other findings and recommendations in the Report:
In conjunction with coverage of the report, El Faro published this photo gallery of the faces of the underemployed.
Economy

Anonymous said…
hey tim, you shoud see the last horrible thing that the ARENA goverment just did, they just fired a worker of the FOVIAL just because he didn t go to the march of the last july 13, anyway check the blogs pijazo.blogspot.com, rojosrojos.blogspot.com, chichicaste.blogcindario.com, gatosfrentudos.blogspot.com, and many others, so you can see the black heart of the ARENAZIS, and with your post that certain people doesn t have work and the people that does, they re firing em, that s not fair
9:00 AM

Anonymous said…
this just show what i have been telling to my people, el salvador is in a very rough , sad, pour situation.
6:08 PM