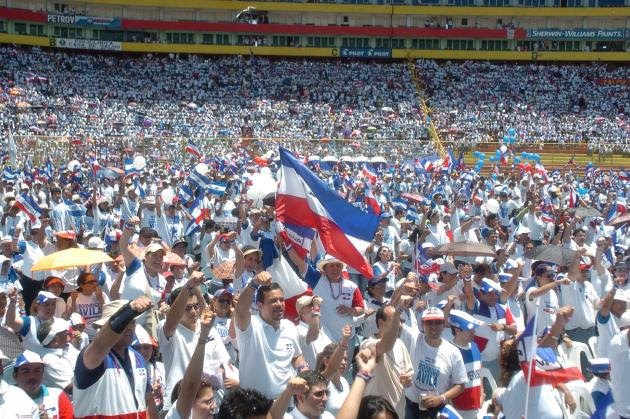 Some 50,000 ARENA supporters, dressed in the tri-color red, white and blue of their party, converged on Cuscatlan Stadium in San Salvador on Sunday. Billed as the "Grand Crusade for San Salvador," ARENA wanted to show that it could turn out crowds for its presidential candidate Rodrigo Ávila as large as those following Mauricio Funes. (El Faro raised doubts about Sunday's crowd when it reported that many government ministries conveyed the "suggestion" to their employees that they should turn out for the ARENA rally).

One of the biggest questions about Rodrigo Ávila's campaign is who will be his vice-presidential running-mate. Current predictions are that it will be Arturo Zablah, the businessman, ex-minister of the economy, who tried to run for El Salvador's presidency as a candidate in the center earlier this year but was unable to pull together a coalition. Negotiations between Zablah and Avila are reportedly in progress, with Zablah asking for certain conditions including a significant role in economic policy, before he lends his credibility to the ARENA cause. The prospect of Zablah as Avila's running mate shows that ARENA is trying to move its image towards the center as it tries to decrease the FMLN's lead in the polls.
2009 Elections ARENA

Basta de Casaca said…
Too little, too late for ARENA.

Unknown said…
Fraud can only be commited against a people who has no insitutions of vigilance, or who is indolent, unable or stupid.

Neither is the case of El Salvador's people.

Fraud claims are only more, and worrying leftist propaganda babble.

Anonymous said…
there you go samuel, too late for Arena, it s sad that you can see in the videos that while Avila was in his speech all the people was leaving the stadium, nothing like that happened in Funes speech, so we can see Arena is going down with their own people...
9:03 AM

Anonymous said…
how pathetic of chicho avila and arena. and where was that faggot rene figueroa? i think arena should surrender these elections and start preparing for 2014. everyone here is just simply eager to see funes as the new president. and i reiterate two things: 1) chicho avila and mauricio funes should give us a debate broadcasted live, not only to el salvador but through CNN world wide, particularly in USA. if chicho avila thinks he can still win, then let him pull this one off and let him convince us that he´ll make a better president than funes right in funes´s own face, on live TV. 2) the only possible way ARENA can win these elections are through fraud, duh, don´t you remember how felipe calderon of mexico defeated his more popular, more beloved counterpart andres lopez obrador in 2006?
be ready, be prepared 2009 is coming fast!!!
11:38 AM

Anonymous said…
that s a great idea inner self, a debate in CNN transmitted here in the United States, that would be a perfect way to decide who s the man, but all of us know that it won t happen because arena know that they don t have the rage, intelligence, support, etc, so they know that is a lot better to don t do it, by the way, i was listening Dead embryonic cells whe i read your commentary, so i think that you like Sepultura
12:18 PM

Anonymous said…
chishi you speak of as if El Salvador's institutions have an implacable track record. I am such at a loss at your words, did you mean it? Was it sarcasm? Do you even live here?

You only need to see news like these to see how very hijacked our institutions are:

I don't have to go at length about what is Corte de Cuentas right? Basically, in this country swindlers protect swindlers.

And TSE is not an exception. It is controlled by ARENA, it has done all it can to make sure that PDC and PCN continue to exist albeit they were supposed to be long gone.

Fraud is a very possible thing in here to occur, to discard it and lower vigilance is only an invitation for things to manifest.

And El Salvador's people, it is a well-known fact that our people have a very high tolerance to corruption and impunity, or else ARENA wouldn't of been able to rule for 20yrs straight, and the population simple cope with the increasing socio-economic debacle that keeps hundreds of Salvadorans migrating. Culturally we like well-structured organizations that will give us a degree of certainty, of consistency, so we are able to tolerate such disparities such government officials going unpunished even after corruption charges have been publicly brought against them. And let us face it we are easily exploitable, we have of the least "capacitada" working-force of the region. Education here has never been a top priority, so there is ample room for ignorance.
7:52 PM

Anonymous said…
Mr Samuel, as I can see, you have not been in elections before, there are things that are perceived as frauds, but still valid, Arena will win this and the next.
Nevertheless, even some arena's party admirers would like to see a shift in El Salvador's destiny. But just the tought of Funes inviting people like Hugo Chavez to El Salvador, makes my stomach gruls, lets hope that our beatyful country do not have to be ruled by Funes overseen (leaded) by Chavez.
4:53 PM