The government, the archbishop and the lawyers

November 03, 2007
On April 13, 2000, the Inter-American Commission on Human Rights (the"IACHR") issued its findings in an action brought against the government of El Salvador for human rights violations. The government was accused for its failure to bring to justice those who orchestrated the execution of archbishop Oscar Romero in March 1980. The lengthy decision is a damning look at a government which had no intention of prosecuting anyone, and concludes:

In adopting the General Amnesty Law, the State has violated Article 2 of the American Convention. In addition, by applying it to [the Romero] case, the State has violated the right to justice and its duty to investigate, try, and make reparations, established in Articles 1(1), 8(1), and 25 of the American Convention, to the detriment of Monsignor Romero's next-of-kin, the members of the religious community to which he belonged and Salvadoran society as a whole.

Based on the analysis and conclusions of this report, the IACHR recommends to the Salvadoran State that it:

1. Undertake expeditiously a complete, impartial, and effective judicial investigation to identify, try and punish all the direct perpetrators and planners of the violations established in this report, notwithstanding the amnesty that has been decreed.

2. Make reparations for all the consequences of the violations set forth, including the payment of just compensation.

3. Adapt its internal legislation to the American Convention with a view to nullifying the General Amnesty Law.

For the next seven years following this ruling, the government of El Salvador did nothing to comply with the recommendations of the commission. Tutela Legal, the Human Rights Office of the archdiocese of San Salvador, then petitioned the IACHR to condemn the Salvadoran government for its utter failure to comply with the prior ruling. The hearing on that petition took place on October 10, 2007. 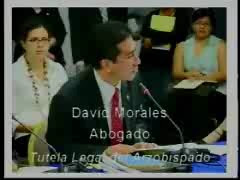 David Morales, a lawyer from Tutela Legal, took the lead in presenting the case before the IACHR. In impassioned rhetoric he recounted the role of Oscar Romero, his assassination, the links of the assassins to Roberto D'Aubuisson, the founder of ARENA, and the lack of any true judicial process before or after the 2000 IACHR ruling.

When it was the government's turn to speak, there was a surprise. In the weeks before the hearing, the government made a confidential approach to the office of the current archbishop of San Salvador, Fernando Sáenz Lacalle, to discuss resolution of the case. These discussions were not disclosed to the Salvadoran public until the October 10 hearing, when El Salvador's ambassador to the Organization of American States declared that the fact that such discussions were occurring was ample evidence of the government's good faith in responding to the prior ruling in 2000. (The rest of the government's presentation relied on arguments the IACHR had already rejected in 2000).

Disclosure of the discussions brought howls of protest from human rights and civil society groups in El Salvador. On October 12, civil society organizations sent an open letter to the archbishop, urging him not to negotiate with the Salvadoran government over compliance with the recommendations of the IACHR. In his subsequent weekly press conferences, Sáenz Lacalle tried to defuse the situation stating that the church was not negotiating over allowing the Salvadoran government to avoid its obligations under the 2000 IACHR ruling, that there had been no intention to hide the fact of the discussions from the public, and that repeal of the 1993 Amnesty Law should be considered.

David Morales, however, was fired from Tutela Legal by the office of the archbishop. The church asserts that Morales was fired for disloyalty and it is an internal matter which they will not discuss with the press. Morales did not keep silent. He called a press conference after his firing to declare that he was fired for not keeping quiet about the failures of the Salvadoran government in the Romero case in the October 10 hearing before the IACHR. From the statement he released on October 24:

Now I understand that the "loyalty" expected by the Archbishop of San Salvador meant my silence before the Commission with regards to the contempt [of the IACHR ruling] by the State. But such silence would have been automatically converted into my largest act of disloyalty to the truth, to the principals of the international law of human rights, and to the humanitarian legacy of Monseñor Arturo Rivera Damas and María Julia Hernández, and to the many other distinguished works that they both constructed.

My arbitrary firing constitutes a reprisal against Tutal Legal of the archdiocese, whose historical, institutional position I sustained in the hearing in Washington. I have been loyal and faithful as I ought as to the persons and as to to the cause.

For complete coverage in English and Spanish of these issues, there is no better source than the San Romero group mailing list whose archives can be read here.

There is also a story surrounding the other lead lawyer at the IACHR hearing. In a very interesting post, lawyer-blogger Ixquic points out that the lawyer for the government of El Salvador at the October 10 IACHR hearing, Carlos Méndez Flores, has an apparent connection to Romero's killers. Ixquic shows that the business card of Méndez Flores was found in the daily calendar of Alvaro Saravia, the one person found liable in a US court for participating in Romero's murder. An interesting question is why a mid-level officer in the Salvadoran armed forces would have the card of a well-connected lawyer in his date book. Méndez Flores went on to defend the armed forces members accused of killing the 6 Jesuits in 1989. And in 2007 he is now found arguing to an international human rights tribunal that the government of El Salvador has done justice in its handling of the Romero case. 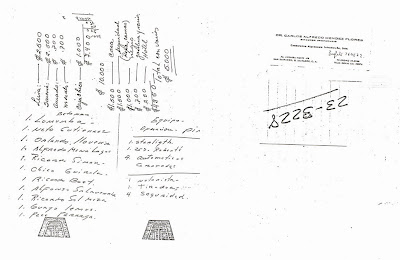 In my opinion, this controversy goes well beyond the value or merit of Romero himself and even beyond the merits of the Romero case, of his particular assassination. In addition to the minor furor when 83 social organizations wrote a letter to Archbishop Sáenz, urging him not to "negotiatiate" with the government, there was also an editorial in the left-leaning DIARIO CO-LATINO insisting that the Church does not have a monopoly over the matter and that the voices of the populace and the civil society should not be ignored. Others have chimed in along the same lines, although the matter has been typically ignored by the mainstream media. (La Prensa Gráfica opted not to cover the news conference by Archbishop Sáenz on the subject; at San Romero, we went back twenty Sundays and found that the paper had covered all the Sáenz conference, "religiously," back through June, on Sundry topics ranging from barbs directed at Venezuela's Hugo Chávez to the Archbishop's criticisms of a Puerto Rican preacher who claims to be the Anti-Christ.)

I submit to you that the issue is not the saint-worthiness of Óscar Romero or even the merits of this case, the reprehensibility of the assassination, nor the facts regarding this crime. The issue for El Salvador is the transparency and the health of its institutions as an emerging democracy. The great outcry in the wake of the revelations about a dialogue between Church and State was not about Romero. Little was said in this protest that had much to do with Romero himself or was personal to Romero. If we step back and look at the big picture, we can see that this is not working at the lowest level, at the personal level or the individual level. Instead, this controversy deals with human affairs at the hightest levels -- the affairs of institutions and states. The Republic of El Salvador has been held to account before an international body, and that body has recommended actions for the country to put its internal affairs in order such that they comport with international standards. Now, Salvadorans have heard that the government is trying to lessen its obligations by negotiating a private compact, a lesser agreement with narrow sectors and limited parties. The press has recently published reports that revealed that leading politicians from all the major parties have been having ex officio, off the record, private discussions about affairs of state, outside the country, in Spain, to work out the business of the country. EL FARO confirmed that ARENA confirms its presidential candidates though a shadowy vetting process, using a cadre of politickos called "the twelve apostles," and we already know that the FMLN picks its candidates from the top down. The question is whether post-war El Salvador will be an open democracy with transparent institutions, or an obscure democracy, that is a "free society" with due process on paper, but whose real business is carried out in smoky back rooms out of public earshot.

The Romero controversy must be read in that context. Just as it would be a mistake to read it more narrowly -- about the merits of Romero or the particulars of one investigation -- it would also be a mistake to give a short-shrift. Given its broad contours, it may be the most important story to follow at this particular moment. It is so important that I changed the focus of my blog, Super Martyrio, from the canonization cause to the Salvadoran investigation. I congratulate you for providing this fine report: very informative.
11:40 PM

I am not sure I agree with you (and that would be a first). I don't see how the story of the Romero controversy is the "most important story" of the current moment. I don't see any real changes here -- at no point from 1992 to the present was an ARENA government ever going to make any movement to permit an unencumbered judicial inquiry into Romero's murder. The approach to the Church made be the government just before the IACHR hearing is exactly the kind of lip service to the commission which the government paid in the Serrano sister case. In other words, this is just another chapter in the unchanging story. The conflict between the archbishop and Tutela Legal is, however, troubling from the standpoint of the continued independence of one of the key voices for human rights in the country.

For me, the more important question, (I'm not smart enough to pick the "most important") is what impact discussions of repeal of the Amnesty Law might have on the 2009 elections. Will Funes campaign for the repeal? Will there be a backlash?
5:59 PM

Carlos X. said…
Tim, we might not disagree as much as you may think. I am not saying that the Romero story is the most important story stripped down to its bare essentials: the government, the lawyers, and the archbishop. What I call "the most important story" is the larger question of the final shape post-war society will take in El Salvador. Will the Left end up feeling, in the end, that the Right got away with murder (à la Chile), and will the Salvadoran Left, which had opted ultimately for armed insurrection, ever completely buy into this post-war democracy? The Romero case is a signal case in that path to legitimacy, and the Amnesty Law is at the fulcrum of the larger question. To the Right, it's the gel that holds the peace together. But, to the Left, it's a white wash. How do you negotiate a compromise that moves you further along to reconciliation without having anybody compromise their principles? To my mind, the Romero assassination was the trigger to the Salvadoran civil war and, therefore, it is at the other side of the war also a key to the final peace.
8:24 PM