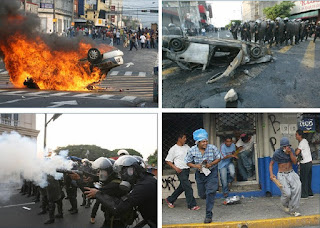 It is a scene which repeats itself with unfortunate regularity in central San Salvador. The authorities take some action against the informal street vendors who fill the streets in the city's central center. The vendors clash with police, windows are smashed, something is burned, tear-gas is fired.

Yesterday it was the seizure of pirated DVDs and CDs being sold on the streets in the city center which touched off the clashes. For four hours, police clashed with vendors. A police car and two other vehicles were set ablaze. Several businesses were looted, including a bicycle shop where news photos showed looters carrying off their ill-gotten bicycles down the streets.

Seventeen persons were arrested during the disturbances. The government plans to charge them as terrorists under the new anti-terrorism law. The auxiliary archbishop of San Salvador, Gregorio Rosa Chavez, described the supposed street vendors involved in the disturbances as "vandals," and called for attention to be paid to the many problems afflicting the city's historic center.

La Prensa had photographers on the scene who recorded the events: gallery 1, gallery 2, gallery 3.
Vendor clashes

shame that innocent LEGAL vendors had their shops looted,especially the bike shop, I know that street scene, used to get a hair cut there sometimes!
these illegals sellers of CD's and DVD's are, ILLEGAL same as in China
they affect the legal sellers who pay license and rent
and as you see in some of the photos, the PNC are quite well trained and show restraint, not opening fire on these illegal sales folk whom were warned to desist their sales beforehand
10:12 AM

Anonymous said…
The vendors who rioted and caused this destruction and mayhem ARE terrorists. They created chaos and wreaked havoc, and steal what is not theirs. Intellectual property rights and private property must be protected. Those who rioted need to be prosecuted to the full extent to of the law to maintain public order and safety. Make an example of’em.
2:18 PM

Anonymous said…
El Centro is a crib of potheads, mareros, thieves, hooligans and the like. I actually question if the folks that turned over the police car and set fire to it where so-called vendors or just some people waiting the opportunity to cause a riot. Speaking about the vendors, imo selling pirated cds and dvds is like recurring to prostetution, selling vegetables, selling clothes, selling stickers, bubble-gum, or just about anything you can get your hands on. In other words, it is my opinion that in a country like this where unemployment is high and life is expensive, people won't care about violating "property" rights if that means that doing so will satisfy their immediate needs. That is the reason why the informal sector is so big in this country, specially when you see maquilas closing down, and other similar things. So you have the police here raiding for cds and such, I wouldn't expect the vendors to surrender their merchandise willingly. The real solution to this would be in the end to provide jobs, both in the urban as in the rural areas with just pay. That way there wouldn't be this whole mess of vendors taking complete hold of the area central that ARENA is so determined to "recover"
4:58 PM

Anonymous said…
BTw, I invite folks to check colatino's account on the incident/police reaction, which in my opinion is more trustworthy than the mass media that is in service of the ARENA mafia:

Basta de Casaca said…
People can call it whatever they want, either "terrorism" or whatever , and nobody should care; people have the right to manage their anger anyway they choose to, even if that means calling those vandals, "terrorists".. they can even believe Toño Saca's stupid lies and be stupid like him, if they choose so .. they are also free to believe that El Salvador is paradise on earth, or whatever; whatever some people think about or call those vandals, it's not going to change the truth.

But when the president of ARENA starts calling them terrorists, that's dangerous; that's very dangerous, because here we have the right-wing political activist, the president of (NAR)COENA, the "president" of El Salvador, a stupid populist, a crazy right-wing fanatic with power (does it sound like Bush?), that's extremely dangerous !

And now that Toño Saca's been calling his followers: "Guerreros nacionalistas", That is the stupidest thing a guy deliberately obtuse with power can say. What he says incites to violence.
7:55 PM

Anonymous said…
wild... it's tragic to me that the underlying situation here- extreme social deprivation and lack of 'formal' employment opportunities- goes unaddressed while the salvadoran government spends hundreds of thousands of dollars arming anti-terror squads. it doesn't make sense, it's an end-of-pipe solution, and i fear it's gonna lead to mas violencia in the coming months.
5:30 PM

Anonymous said…
Visiting downtown San Salvador is very sad. Many of the vendors are just ordinary folks trying to make enough money to survive. Prices continue to climb but wages continue to drop. The government has not taken one single step to address the issue of crime. It seems impossible for an honest person to make an honest dollar in such conditiona.
7:13 AM

Anonymous said…
People, you need to learn how the Goverment works, I'm inicialy from El salvador, and whats going on in El Salvador is going on in other country as well, Now, ARENA Is the most reliable Goverment that will establish the Goverment and will help the Economy in El Salvador.
Here we have a lot of ignorant idiotic people posting nonsence, Know your History before posting. You need to go back to school if you attanded one, I graduated from College and now I work for DC Goverment, and to be honest; the more you learn the more you will understand..........

Just to clarify a post, The president of El Salvador is doing a great job on running the country to a better future..Now, if you don't see it, that means you need to go back to school, only smart educated people will see that...jaja.

And all this disturbance will end once all this people get the message, and the message is " Peace, Law enforcement, and Respect.
3:36 PM

Thats all it is in here, look at yourself before posting negative comments about another country...

Look at your country, spending millions, and millions in WAR instead of helping Veterans fron the WAR........
3:36 PM