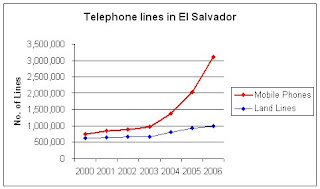 Any casual observer in El Salvador will notice that cell phone use is booming throughout the country. The result is access to communications for many persons and families who did not have such access only four or five years ago. The most recent statistics (through first half of 2006):

Here is a description of El Salvador's market from one telecommunications consulting firm:

El Salvador: The country's telecom market is among the most open in Central America. The government's liberal approach has allowed new technologies to flourish. Fixed-line teledensity, however, remains low. Despite growing steadily, phone lines, mainly in rural areas, are insufficient to meet local demand. Mobile telcos have capitalised on the underdeveloped fixed-line network by emphasising their ability to offer a fast, high-quality service with nationwide coverage. At more than 42%, El Salvador's mobile penetration is lower than the Latin American average, but is remarkably high considering the country's low GDP per capita. The mobile market is served by five competing operators, and there are about three times as many mobile phones as fixed lines in service. With a budding VoIP market, and cable TV telcos permitted to provide telephony and Internet, El Salvador is a promising country for convergence strategies. Two operators already offer triple play services.

El-Visitador said…
It is doubtful that there will ever be much landline density.

El Salvador missed the industrial revolution, on account of the brain-dead Conservatives and their wars against the Liberals; therefore, investors never built the extensive railroad networks they built in Europe and the U.S. in the 19th century. We are still in the process of going from ox-carts to cars, bypassing locomotive technology.

Likewise, ES was late to the information revolution, on account of sclerothic state enterprise ANTEL and a war or two. We are going straight to wireless for most consumer applications, thereby bypassing wirelines.
12:07 AM

vee said…
This comment has been removed by the author.
8:03 AM

vee said…
As I understand it, it is cheaper to maintain a cellular network than it is to install and maintain landlines.

(sorry! Deleted previous post to do some editing!)
8:05 AM

Anonymous said…
Interesting statistics! I believe that most of the growth in cell phone use is due to technology and competetion. When I moved to El Salvador in 2002 Antel had just become private and prepaid phones cost $60 (land line comparison=$300/household in rural area with no lines).
These days phones cost as low as $25.
Another interesting technology study would be to look at how Internet use has grown among young Salvadorenos...
11:42 PM

Unknown said…
The Socialist ststus in ES strong when I arrived here in 2011. Nowin 2012 the people are coming to fruition with such innovations as strong concern for the safety of their drivers, including non-elected auto options like having a fire extinguisher, cone and spare tire equipment. All under a consertvative leader.
11:31 AM