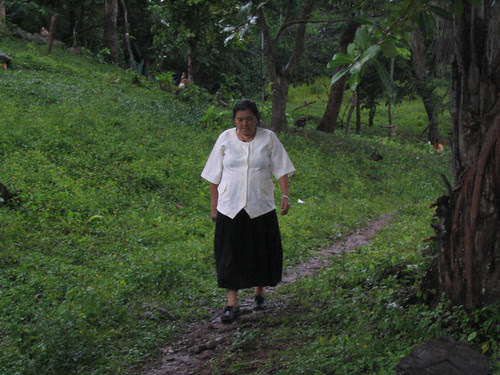 Sad news from El Salvador in this communication from Voices on the Border, about the death of Rufina Amaya:

We are sorry to bring sad news. Today, at 12:30 PM, Rufina Amaya, known around the world as the sole survivor of the infamous massacre at El Mozote (December 11, 1981), drew her last breath. She had gone into the hospital with respiratory problems and later a stroke. Due to complications with her diabetes and hypertension, she suffered multiple heart attacks and strokes in her final moments. Rufina gave birth to 11 children, only 2 survived, the oldest, Fidelia, and the youngest, Marta. The rest died either in the massacre or during the war.

The massacre at El Mozote Dec. 11th, 1981, orchestrated and carried out by the Salvadoran military with the backing of the U.S. government, claimed over 1,000 lives. Rufina´s survival and escape was miracle, even as she heard the screams and cries of her townspeople, and even her own children, as they were brutally murdered. She has continued to be the most visible symbol of the importance of historical memory, re-telling her tragic story over and over for foreign delegations, journalists, and even in the U.S. Congress. Rufina’s story has been written, taped, and passed along through countless retellings. You can even see her on YouTube. You can also read about the massacre at El Mozote in The Massacre at El Mozote by Mark Danner (1994)[ a shorter version is available online from Mark Danner's 1993 article in the New Yorker which vividly tells the story of El Mozote and Rufina Amaya.

We are communicating with her family to find out where they wish donations to be sent in her honor. Rufina participated in a number of organizations, including the Pastoral Team of Comunidad Segundo Montes, and the War-Wounded Association (ALGES) of Morazán.

Our January delegation met Rufina just two months ago, but did not ask her to re-tell her testimony. Even without hearing those terrible stories, the delegates were moved by her passion and eloquence and the obvious moral authority she wielded gently and humbly. She was a close partner of Voices on the Border and a tireless champion for justice and truth. Her death is an enormous loss to all who knew her, and millions more who cried for her, having never met her.

You may also want to read this blog entry by my friend Meg who met Rufina Amaya last year.

Carlos X. said…
For those who never heard Rufina's harrowing narrative about El Mozote, you may find it in message no. 476 of the San Romero message board:

Anonymous said…
Here is additional information on Rufina Amaya's passing, from emails sent by a North American friend of hers in El Salvador:

With tears in my eyes I write to you with the sad news that Rufina Amaya, the lone survivor of the massacre at El Mozote (Dec. 11, 1981 - El Salvador) died today approximately 12:30 p.m., Tuesday March 6th.

She had been unconscience for more than 12 hours and due to complications with her diabities and hypertension, suffered multiple heart attacks and strokes in her final moments. Rufina gave birth to 11 children, only 2 survived, the oldest, Fidelia, and the youngest, Marta. The rest died either in the massacre or during the war.

Rufina continued to live in Morazan, a very humble and simple life. I had the chance to meet her years ago, but only began to get close to her about 4 months ago. She was a walking duality, full of so much sorrow and pain, yet continued to laugh and smile enjoying the simple things in life: family, friendships, good food and mother nature.

I´m sure her funeral will draw hundreds if not thousands in the coming days. I invite you all to send your messages for her family, in spanish or english, to my email and I will print them out and give them to her daughters. I will let you all know arrangments and details of the funeral when available.

And earlier that morning:

It is with great sadness that I write to you from San Miguel, El Salvador with the news that Rufina Amaya is in critical condition after suffering respitory problems and later a stroke. Rufina, 64 years of age, is the lone survivor of one of the most tragic massacres of th Americas in modern history. The massacre at El Mozote Dec. 11th, 1981 claimed over 1,000 lives at the hands of the Salvadoran military backed by the U.S. government. Rufina´s survival and escape was miracle, and since then she has suffered 25 years retelling the nightmare of what she witnessed to foriegn delegations, journalists and even in the US Congress.

She is a humble woman of great dignity and stregth for whom I have translated for on numerous occassions. Last October we awarded her with the Herbert Anaya Sanabria Human Rights Prize, recognizing her amazing contribution for recuperating the historic memory of the autocrities committed at El Mozote and for her perserveriance in working for human rights through telling the truth. She has remained in Morazan in her simple dwelling throughout these years, interupiting her daily life whenever a group of visitors want to visit the Memorial site and hear her testimony. I have accompanied her these past 3 months visiting her home and providing her transportation to doctor´s appointments.

Her daughters Marta and Fidelia, along with other family and friends are with her at the hospital. I will return upon sending this email and may enter during visiting hours at 11am.... and will be sure to write you with any changes in her situation as soon as they may occur. Rufina is not breathing on her own, rather is hooked up to a respirator. The doctors hope she will begin breathing on her own to begin new treatments.

Your thougths and prayers are encouraged and appreciated.

ixquic* said…
Rufina has not died.

Near the day of the woman, she flew and showed her example like brave woman,
a woman with voice…

Caminante said…
Nada en la prensa estadounidense por supuesto. I have hunted through the search engines of various papers and there's no obit for her.

She will live on in the Salvadoran people, sí, presente.

Anonymous said…
I met her in 94, along with rogelio Poncelee, the Belgian Priest who worked with RV and the ERP.
this is VERY sad.
memory and testimony are being swallowed up by world fascism of fear.
3:42 PM

She is not the only known survivor of the massacre,
there is a william barrerra also, who was a child when it happened, he joined the erp, then in 92 joined with former atlacatl members to make up the PNC, his testimony along with Rufinas is documented in la fiera esta con todas sus garras, by altercine Montreal Canada-Documentary Film.
I will soon have it digitized and posted on the net soon.

I also believe that Rufina's experience is documented in LAs Mil y unas historias de radio venceremos, (Rebel Radio) on Amazon---The chapter about the ciguanaba they "captured" when in fact it was a survivor of El Mozote.
3:47 PM

Anonymous said…
As a visitor who has been welcomed into Rufina's home several times now, I am so thankful for all of your words about her life and how it has affected so many people - reading this makes it easier to be far away from El Salvador when I would prefer to be making my pilgrimage to Mozote this weekend.
Each year for the past four years I have travelled to Perkin with a group of students who participate in an art and reconstruction project north of San Salvador, and each year each of the students has been so deeply affected by not only Rufina's words and her story, but her presence and graciousness. She treated each person who came to listen and talk with her as a loved one, making us comfortable in her home, feeding us meals, and answering each and every question, even as we felt we were already gaining so much just from being with her.
In my life, Rufina and her story are twin guides as I continue to work in San Francisco and El Salvador. When I am flagging or becoming tired, these are among the influences whose power is so great that I can't seem to turn back, even when it's most appealing to do so. I am so thankful for Rufina's work and the fact that she never seemed to tire, never failed to have space for us in her home and her mission.
2:39 AM