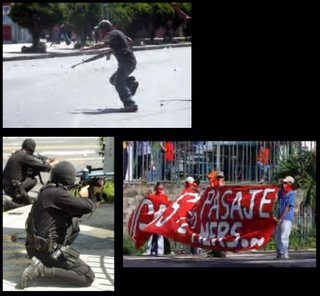 On Wednesday, July 5, protesters amassed outside of the University of El Salvador (UES) in San Salvador. The demonstrators were voicing opposition to an increase in the cost of bus fares and in electricity, just approved by the government in response to rising world oil prices. Street demonstrations against government policies and rising prices are common in El Salvador, especially around the UES, but this time the events turned deadly violent.

Although the order of events is not clear, some elements of the protesters (referred to by the media as "supposed students") went beyond marching to vandalism, and tire burning. Riot police approached and chaos erupted. The extensive media coverage of the chaos caught clear images of a masked man with helpers firing an M-16 at police, and another using a home-made weapon. The police used rubber bullets and tear gas as helicopters flew overhead. A shot went through a university office and struck a university employee in the chest. Two policemen were shot and killed and others wounded. Chuck Stewart has links to some of the media coverage on his blog.

The Salvadoran blogosphere was united in its grave concern over the violence. The events outside the UES left Ligia remembering the events and fears and dangers of the years of the civil war. Soy Salvadoreño laments the deaths of the police officers and laments the actions of president Tony Saca who immediately reacted to the events at the UES as a political partisan, blaming the FMLN for being a "party of assassins and dangerous people." But Soy Salvadoreño's strongest words are for the leadership of the FMLN. He lambasts the official press release of the FMLN, which denounced the government for repression of a peaceful protest march and never denounced the slaying of two police officers. He asserts that the FMLN's rhetoric and inability to control its membership adds to the current crisis.

In a post titled "Never a Return to the Past," JNelsonS at the Hunnapuh blog praises the Salvadoran police as defenders of democratic values, who with great courage protect the population against the forces of disorder. JNelsonS condemns "ideological terrorists" who would use violence against those who do not conform to the proper socialist ideology.

Ixquic decided to go to the National Assembly to hear the arguments about the anti-terrorism law which the Saca administration wanted to push through in the face of the week's events. She found the arguments partisan and stupid, other than the words of an officer from the National Police who spoke against approving a law in the passion of the moment, and urged instead the creation of a commission to study what had happened.

Jjmar, also writing at Hunnapuh, notes with concern subsequent events in which the police obtained a judicial order allowing them to take control of the grounds of the UES in order to search for evidence relating to the shootings. This police takeover of the grounds has troubling echoes of the period of the Salvadoran civil war when the government shut the UES down as a breeding ground for subversives and guerrillas. Rafael Menjivar Ochoa is prompted to write a long post about his long memories of the UES and the occupation during the war years -- his father was the rector of the University when the army closed it down. Rocío wants everyone to know that UES, her alma mater, is not responsible for the violence, instead it is the victim of those who would use "the struggle" as a pretext for violent acts.

The violence at the UES is being viewed in El Salvador in connection with another killing which evokes memories of the civil war years. El Trompudo and Hunnapuh both speak out about the lack of coverage in the mass media of the double-slaying of Don Francisco Antonio Manzanares, age 77, and his wife, Doña Juana Monjarás de Manzanares, age 75. They are the parents of "Mariposa" Manzanares who was an announcer on Radio Venceremos, the covert radio station of the FMLN during the civil war in El Salvador. The double murder was particularly gruesome, and has the hallmarks of a death squad killing. Hunnapuh denounces the slayings and the appearance that "recalcitrant elements of the far right" are returning to the "roots of ARENA" and resuscitating death squads against those who criticize the policies of the government.

Finally, Hunnapuh has a simple post on his blog with pictures of the Manzanares funeral and the funerals of the police officers killed outside the UES. The images of grieving relatives are the same. Hunnapuh reminds us that the victims of this violence are never those in the halls of power, but the humble people who join the lower ranks of the police or who march in protest. The deceased were:

Hodad said…
after not being here for 3 years i return to where i wish to live, work and play, life goes on
things are tense here and being in the central market friday with the fish mongers, many say, what happened is the beginning
seems the same here as in USA the rich get richer the poor get poorer
here there are few ways to express oneselves, violence is predominate, just cultural and yes i was here a bit since 1983 lived here since 94
but for me, El Salvador is still a fine country and with the biggest heart.
[and of course the best surfing in the world, i know]
also seems people here are more obese as the same in USA with the preponderance of fast food, and more cars and more sedentary lifestyle, and also the new and more beers and liquors
the food here though for the most part is still the same, bland,greasy and questionable nutritive value/
so I open a restaurant!!
Hickory style BBQ but looks as if I wil have to import the cerdo, and will again import shrimp,
I am amazed at the cost of food here and I am saddened as to how the people afford to eat, with mostly the same salaries, crazy......
yes, I do not care for CAFTA, as before shrimp was 10% duty and pig, maybe 35%
so YES i will take advantage of this, and will even import Hickory wood from NC why not?, as i would feel bad to be part of the deforestation that is so prevalent here, but then we are also working on biogas from fish waste.
CESTA seems to do nothing,as with most organizations here lots of talk and posturing in suits, unwilling to dirty the hands
but then the news today of the minister of mediao ambiente stopiing the mines is EXCELENT NEWS especially with the pollutin and this would ultimately affect small fish breeding
so, I need to go the University to speak with some professors in regards as to my treatment at the hands of corruption here and the state of investing here, questionable
be careful, their website is closed so i assume there also is closed
but fot the most part folks are appalled at what happened and hope that this is not the beginning of before
if only the 'papi pagas' would assist their fellow countrymen
and quit partying then things could be fr the better,
but looking a the situation now in the USA with [again Mikey's 5],
arrogance,greed,ignorance,obesity, and xenophobia, it seems Salvador is following suit,
but then what do I know, I am just a fisherman
Viva El Salvador
Paz a TODOS
12:07 PM