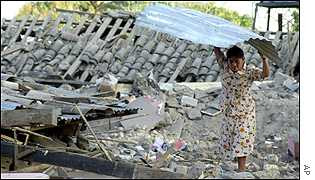 On January 13, 2001, a massive earthquake struck El Salvador. A BBC report from the time provides accounts of the devastation. Exactly one month later, a second quake hit the beleaguered country. All told the 2001 quakes killed more than 1200 people and left more than one million homeless.

Today the Salvadoran press reflected back on the tragedy. La Prensa Grafica reports on families still waiting for reconstructed homes, five years after the tremors. Government officials quoted in the story state that 126,000 houses out of 163,000 houses destroyed have been rebuilt. Meanwhile the story describes various communities named "13 de enero" or "January 13th" where hundreds of families live in poverty, hoping to someday get a new dwelling.

El Diario de Hoy has a photo gallery of damages to hospital buildings caused by the 2001 quakes that have been left unrepaired because of a lack of funds.

Diario Co Latino reports on family members visiting the site of the landslide in Las Colinas to place flowers. The earthquake led to the collapse of a hillside killing hundreds in this middle class community.