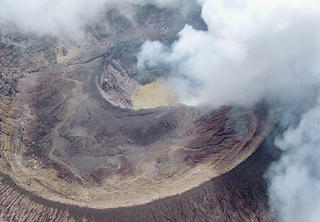 Salvadoran authorities have put the areas around the Santa Ana volcano on yellow alert after a recent rise in activity at the volcano. The Salvadoran government agency SNET monitored 17 small earthquakes coming from the volcano, and columns of gas and vapor reached to a height of a kilometer. Authorities are not recommending any evacuations of persons living nearby, but there will be an increased level of monitoring and tourists will be barred from the crater area.

SNET has an informative website (in Spanish) about the volcanoes of El Salvador.