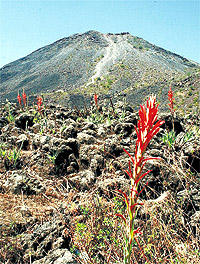 Recent headlines out of El Salvador highlight the country's vulnerability to natural disaster. Recent strong rains have caused flooding, destructive mudslides, and collapses of roads and buildings. Yesterday one man died entombed in a mudslide; another dies in a traffic accident caused by flooded roads. Small earthquakes have been measured in the country this week; although no damage was reported. Salvadoran authorities also report a new increase in activity in the Santa Ana volcano. Fumes of smoke and vapor have been more pronounced than recently; although officials do not expect an explosion producing lava.

These headlines made me recall the words of Jesuit theologian Jon Sobrino, who teaches at the University of Central America in San Salvador:

So, to live in El Salvador is a heavy burden, but it is not borne equally by everyone. As always, it weighs more heavily on the poor majorities. The [2001] earthquake has destroyed houses, especially the ones built of mud and sticks or of adobe, which is where the poor live because they can't afford cement and iron. The floods and mudslides have buried people and homes -- simple middle class homes among them -- but always the poor, because the steep and barren hillsides are often the only place they can plant their crops, never on a fertile plain.

Anonymous said…
Wouldn't you imagine that the deforestation in El Salvaodor is also contributing to the mudslides, etc.?
(There's a good article on it at http://www.concernusa.org/news/item.asp?nid=34