Showing posts from November, 2012
Show all

I recently hosted an event where I showed some of my favorite YouTube video clips about El Salvador.   One of those clips, just titled "El Salvador Tourism" does a great job of highlighting all that El Salvador has to offer.   Watch the video and enjoy.
Post a Comment
Keep reading

November 25, 2012
There is an interesting article on the Fox News Latino website titled  Ninis - A Generation that Neither Works, Nor Studies in El Salvador .  The article discusses the situation of youth with nothing to do: In various Latin American countries, they call them "ninis" (pronounced nee-nees.) The Spanish word "ni" means "neither" and they are called "neither neithers" because they are young people who "neither work, neither study" at school or university - or in Spanish "Ni trabaja, ni estudia."  This generation in the small Central American country of El Salvador is attracting attention and causing concern.  Costa Rica's State of the Region in Sustainable Human Development Program, in coordination with El Salvador's Studies for the Application of Law Foundation (FESPAD), found that ninis between the ages of 15 and 25, can be either gender, with 40% being female and 60% being male. The total number of ninis in El Salv
3 comments
Keep reading

November 23, 2012
The BBC is reporting on El Salvador's gang truce this week.   In a feature article , they look at the various perspectives on the gang truce.   They also include a video tour from within a prison in El Salvador.   You can watch this tour of the Ciudad Barrios prison here .     The BBC broadcast a 30 minute radio program concerning El Salvador's gangs this week which you can listen to here .
Post a Comment
Keep reading

Corn: the staff of life in El Salvador's campo 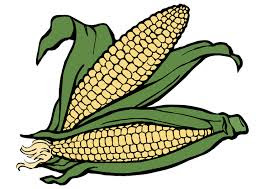 On Thanksgiving Day in the United States, I want to share an essay by Brian Rude, a Lutheran pastor living in El Salvador titled Give Us This Day Our Daily Bread .   Brian describes the role of corn in the dance of life in rural El Salvador: Corn–next only to water–is the lifeblood of the Salvadoran people. Salvadoran people are “el pueblo de maíz”, corn people. Their tortillas, without which a meal isn’t a meal, are made from dried and ground corn kernels.... The majority of the harvest–the “mazorcas”, or cobs–is left to dry, after the dried stalks are broken and bent. At harvest, these corn husks are broken off and are brought to the house, where the mounds of cobs fill every available storage space, even much of the living space, waiting to be husked and degrained. This labour-intensive process, danced while seated and often while socializing, fills every waking hour. The kernels are then stored in cylindrical metal grain bins, often inside the farmhouse. They are mixed wit
Post a Comment
Keep reading

November 21, 2012
An   article  on InfoSurHoy.com discusses a security program in El Salvador which sends police and the armed forces to schools in an attempt to keep students and teachers safe from violence: To stem the rising tide of violence washing over the country’s educational institutions, El Salvador’s National Civil Police (PNC) is increasing its focus on bolstering security at schools throughout the Central American nation, beginning with those in areas with the most crime....  The PNC will train an additional 260 officers to join the 130 who already are part of the Safe Schools program. The officers will be trained in police ethics, human rights, protection of constitutional rights, interventions and traffic and road safety. However, the Ministry of Education estimated 1,000 officers are needed to provide adequate protection nationwide. Up to two officers are assigned to a school, depending on its enrollment and number of crimes committed in the area. The program is striving to have two
Post a Comment
Keep reading

November 19, 2012
Voting anything but the party line is viewed as an act of treason by El Salvador's political parties.    On November 8, deputies in the National Assembly approved the country's 2013 budget .   In the vote, four deputies of the ARENA party broke with their party and voted for the budget.    The rest of ARENA abstained from voting on the budget while all other members of the legislature voted for it. Voting differently from the party line resulted in ARENA expelling the four deputies  from the party.   The right wing party immediately called the straying deputies "traitors" and suggested they must have sold their votes.  In contrast, president Funes stated in an interview that the four ARENA deputies were simply acting in a true democratic fashion. Insisting on strict adherence to the party line is not unique to ARENA.   In January 2005, the FMLN expelled two of its deputies who voted to approve the budget presented by president Tony Saca of ARENA.   Withou
1 comment
Keep reading 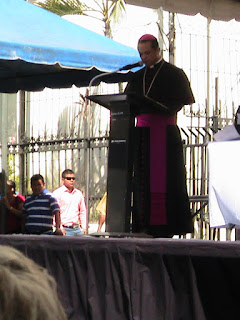 A wide coalition of El Salvador's churches came together Saturday to launch the Pastoral Initiative for Life and Peace.    Bishops and pastors from the Roman Catholic, Lutheran, Anglican, Assembly of God, and other protestant and evangelical churches came together to indicate their collective agreement to use their role as pastors of Christian churches to advocate for a culture of peace in El Salvador.   The clergy see the current gang truce as a true opening where an opportunity for peace exists. The truce has lowered the average daily homicide rate from 14 to 5.3 in the country.    Catholic bishop Fabio Colindres, who was involved with brokering the truce, delivered a sermon focusing on the biblical call for the faithful to be peacemakers.   He also rejected those who view the gang truce with suspicion or as something unreal.   Colindres and the leaders of the other Christian churches called on the government and all sectors of Salvadoran society to commit themselves to this p
Post a Comment
Keep reading

The Minister of Public Security takes an incognito bus ride

November 09, 2012
Our friends at the Voices from El Salvador blog offer their commentary on the recent "incognito" trip of the Minister of Justice and Public Security for El Salvador on a city bus: [On November 1], El Salvador’s Minister of Justice and Security David Munguía Payés did something most unusual for a high-ranking government official – he rode a bus in San Salvador.  Dressed in a blue polo shirt, some serious sunglasses, and a ROLEX (yes, as in a super-expensive gold watch) Payés boarded the 29-F on the Juan Pablo II (a major road through San Salvador) bound for the shopping center in Soyapango. Once he paid his $0.25 fare, the Minister of Justice and Security took his seat amongst “the people.” Payés’ bus adventure, which lasted only 10 minutes, wasn’t really meant to be an act of solidarity with his Salvadoran brothers and sisters, many of whom travel long distances by bus everyday just to get to their low-paying jobs. Nor was it an effort to raise awareness of climate ch
1 comment
Keep reading

November 08, 2012
El Salvador's economy remains stuck in low gear.  As a result, Moody's Investors Service recently cut the country's credit rating.  The credit rating agency explained the problems of the country's stagnant economy: El Salvador’s credit rating was cut by Moody’s Investors Service, which cited the Central American nation’s weak economic growth and debt ratios.  Moody’s lowered the country’s rating one level to Ba3, three levels below investment grade and the same as Bolivia and Portugal, according to an e-mailed statement today.  El Salvador’s economic growth has averaged 1 percent over the past five years, compared with 2.8 percent in the previous five years, on low and declining investment ratios, Moody’s said. The country’s debt-to-gross domestic product ratio was forecast by Moody’s to remain at about 53 percent of GDP this year.  “Since growth prospects remain weak and the government has a challenging outlook in the years to come, it will be difficult to redu
Post a Comment
Keep reading

November 07, 2012
A new article on the website Intercontinental Cry contains an  interview with Salvadoran Indigenous leader Shandur Kuátzin Makwilkali . Shandur is President of the National Federation of Indigenous Peoples of El Salvador, which works to resuscitate the vitality of indigenous cultures in a part of Central America where they have been systematically and brutally suppressed. The challenge is significant:  "We don't have enough unity, solidarity", he laments, before returning to the positive: "But now we have a federation, present in 14 departments, with 10,000 members."  The Federation celebrated its first anniversary on 21 January this year. In addition to its remarkable growth, the indigenous movement has established a small University of the Indigenous Peoples of El Salvador, teaching four courses lasting for three and four years. Students can study courses in indigenous medicine, the Nahuat language, indigenous administration, and biculturalism.  Anothe
Post a Comment
Keep reading 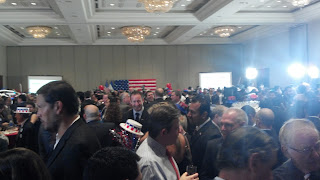 Hundreds of invited guests toasted US democracy on election night at a reception hosted by the US Embassy Ambassador Aponte interviewed on Salvadoran  television on election night On election day in the US, it is appropriate to reflect on its relations with El Salvador.   The influence and impact of the US on this tiny country of 6 million people cannot be overestimated.   One out of every four people born in El Salvador lives now in the United States.   Their earnings sent back to family members in El Salvador make up a sixth of the Salvadoran economy.   More than 200,000 Salvadorans are in the US on Temporary Protected Status , and their ability to stay in the country continues to rest on the good will of the administration in power.  El Salvador uses the US dollar as its currency. The major recent US foreign aid initiatives in El Salvador have been the Millennium Challenge Compact which focused on development in the northern zone of El Salvador and was recentl
Post a Comment
Keep reading 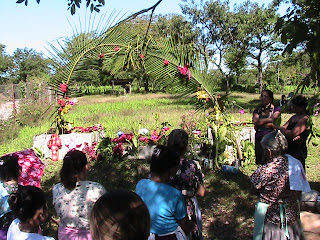 Friday, November 2, was the Dia de los Difuntos, or the Day of the Dead in El Salvador.  Families traveled to cemeteries across the country, where they cleaned and decorated with flowers the gravesites of deceased family members.  I have written about this colorful commemoration of the departed in prior years. But what if you don't have a gravesite for a departed loved one?  What if your son was murdered by death squads during the civil war and his body eaten by vultures?   What if your wife was swept away in the current of the Sumpul River after the Sumpul River Massacre in 1980?   For thousands of Salvadoran families, these sorrows are profound on November 2 each year.   There were more than 75,000 civilian victims of the civil war in El Salvador, and the whereabouts of many of the bodies of the victims are unknown.   On Friday I was in the town of Arcatao , in far northern Chalatenango, El Salvador.   This was an area which saw great conflict during the civil war, and whe
1 comment
Keep reading
More posts