TACA and Colombian airline to merge 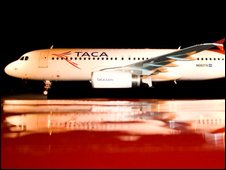 El Salvador-based TACA Airlines announced this week that it is merging with the larger Colombian airline Avianca. The companies indicate that they will continue to operate the airlines with separate identities going forward. Since 1961, the airline has been owned by the Kriete family. They will own about 1/3 of the shares of the combined company.

You can read a history of the company at this link from its founding by a New Zealander who flew in the Canadian air force in World War I until the present time when TACA operates an extensive route system throughout the Americas.
Economy TACA

Unknown said…
Please change the spelling of "Columbian" in the headline. It is embarrassing.
11:41 AM

Griselda said…
Well, it is not embarrasing, it is just a simple "typo" as we are HUMANS, with a simple indication will be more than enough!

: said…
For more details on TACA Airlines like Information, history, baggage details, check in, destinations, fleets, images and more visit "Altiusdirectory.com". This URL may be useful.