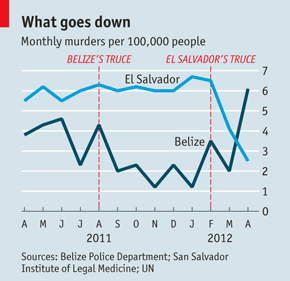 This chart illustated an article in the Economist titled El Salvador's Gangs.  The article describes the gang truce which has continued since mid-March through today:


But now quiet reigns in the country’s roughest districts. In March the two main gangs, the Mara Salvatrucha and the Mara 18, declared a truce, cutting the murder rate by two-thirds overnight (see chart). Police say May has been even calmer. The rate is now close to that of fairly stable Brazil.

The mobs have since made further concessions. On May 2nd they promised not to recruit in schools. Five days later inmates at La Esperanza, an overcrowded prison, vowed to stop extorting people using jail phones. “I want to ask forgiveness from society and those who gave us the chance to change,” said Dionisio Arístides, the Salvatrucha leader. “We’re human beings who aren’t just here to do evil.”

Not everyone believes that.

The Economist article, which is worth a read, goes on to offer the cautionary tale of Belize, where a gang truce negotiated by the government has subsequently broken down and the murder rate spiked.