Thanks to the folks at the Voices on the Border’s blog for bringing to our attention a new grassroots movement in El Salvador to stand up to extortion:

A couple weeks ago, Salvadorans tired of the extortion and violence that plagues their neighborhoods began a calling on their fellow citizens to overcome their fears and not pay when the violent street gangs try to extort money. The movement uses the face of Don Ramón, a Mexican sitcom character from the 1970s known as a “rent-dodger,” to convey its message that the people are tired and should no longer going to pay extortion (or “the rent” as it is called on the street).

In a short period, the image of Don Ramón has been spray-painted all over the capital, and found its way onto t-shirts and bumper stickers, and banners that have been unfurled on bridges, monuments, and bridges. Almost 20,000 people have joined the movement on Facebook

The movement has been supported by public officials from both major political parties, including the mayors of San Salvador and Santa Tecla.

There is a website for the Don Ramón movement here. On the website is the following manifesto (thanks to VOTB for the translation):

This Tuesday, the 20th of April, various monuments, buildings, and bridges in the Capital are covered in giant banners that state: “I AM NOT PAYING THE RENT!”

It is time to shed our fear and retake our lives.

We are tired of feeling powerless against the violence and blackmail that have converted our neighborhoods, villages, parks, and schools into zones where law does not apply; there is no happiness; and we live without harmony.

We cannot continue this way. Our fear, our silence, and our passivity are accomplices to the crimes committed by the delinquents. We cannot wait for the State to resolve that which we are unwilling to confront and stop.

This is why we, a group of citizens who are tired of the impotence, are adopting the figure Don Ramón to declare that we are retaking what belongs to us: our neighborhoods, communities, villages, schools, and voice in order to be heard.

Ours is a call to civil courage and to take responsibility for our communities. Don’t try to respond to violence with more violence. If you try as Salvadoreños to recoup what is ours, the word gang will return to meaning our circle of friends; and respect will return to being that which we earn through a job and dignity instead of with threats and violence; and that the neighborhood returns to a place of cohabitation and happiness, and no longer a territory of dispute between gangs.

Ours is a call to overcome fear. We are no longer able to allow our fear to paralyze us. We have to raise our voice and show that we, the decent people, we are much, much stronger. The face of Don Ramón will have propagated throughout the city so quickly because it is a symbol that the majority are tired of remaining silent.

Don Ramón is only a face that we adopted to express that we are tired and that we as individuals have to take responsibility for our families, our communities, and our El Salvador. There is no political party, church, or ministry behind this campaign. We are all Don Ramón.

Even when the Don Ramón banners are no longer on the bridges and monuments, the message will remain. It will hit Salvadorans in their heart and conscious: We are all tired, but we are able to decide to take action and we will be strong if we act together. We cannot feed ourselves to the violence that is consuming us. We all ought to promise to take action to recuperate what is ours. This is why Don Ramón exclaims: I AM TIRED! I WILL NOT PAY THE RENT!

We call upon all that are able to reproduce this message where you live, work, or study. We are more, and we are more creative. 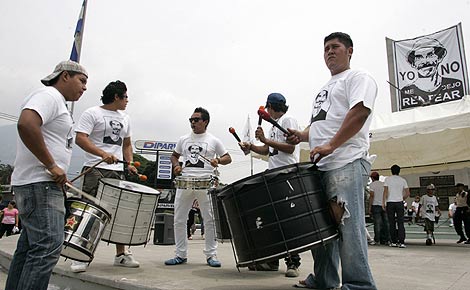 thelifemosaic said…
Thanks for the perspective, Tim. I saw these all over San Salvador in March and I was told about the sitcom character connection but I didn't know about the political connection, too.