Showing posts from December, 2019
Show all

Top stories of the decade

December 31, 2019
As we close 2019, this is my list of the top 10 stories from El Salvador during the past decade.   It was a decade of changing personalities and parties in power, but also a decade in which major themes like violence, slow economic growth, and migration remained as entrenched challenges for the country. Rise and fall of the FMLN .   The beginning of the decade saw the FMLN achieve its highest level of political power.   The party of the former leftist guerrilla movement won El Salvador’s presidency for the first time with Mauricio Funes in 2009, and his presidency started with very high levels of public approval.   But from this peak, the party’s fortunes steadily declined.   The FMLN lost four seats in the Legislative Assembly in 2012, and in the 2014 election would retain the presidency by the slimmest of margins.  Salvador Sanchez Ceren, who was president from 2014-2019, was an uninspiring leader who enjoyed little popular support.  Conservative parties in the Legislative Assembly
Post a Comment
Keep reading

Convictions in a mammoth gang trial don't include politicians 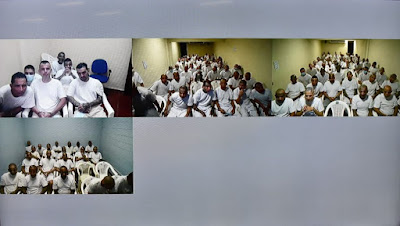 Defendants in gang trial listen to court's ruling by video link In El Salvador, a massive trial against members of the MS-13 gang recently concluded in San Salvador.  From the AP :  A court in El Salvador has sentenced 373 convicted members of the notorious Mara Salvatrucha gang to prison terms of up to 74 years for crimes ranging from murder and arms trafficking to terrorist association in a mass trial historic for the sheer number of defendants, authorities said Friday. The trial had featured the testimony of Noe , a pseudonym for an ex-gang member turned cooperating witness against his former homies.  His testimony revealed a broad range of criminal activities of MS-13. As the judge in the case issued his ruling, he revealed videos which had not previously been shown in open court involving politicians who were willing to sit down and negotiate with El Salvador's gang leaders.  The judge criticized prosecutors for having failed to bring charges against politicians.
Post a Comment
Keep reading

Bukele at Doha Forum and on 60 Minutes

December 16, 2019
Nayib Bukele had two appearances in international media on Sunday.    He gave the closing address at the Doha Forum in Qatar.    Bukele was in Qatar as part of an international tour that included stops in Japan and China.  The Doha Forum, which defines itself as a global platform for dialogue, this year discussed various topics under the theme of "Reimagining Governance in a Multi-Polar World." Bukele's remarks can be summarized as "the world is now globalized, completely connected by the internet and our smartphones, and producing more than ever before in history with the resources to feed and provide health care to everyone on the planet.   Then why don't we?"   (He did not answer the question he posed).  The second appearance was an interview on 60 Minutes on the CBS network in the United States.   The headline grabbing soundbites were "our whole economy is in shatters," and El Salvador does not "have asylum capacities, but we can bui
Post a Comment
Keep reading

Migration stats from the Northern Triangle 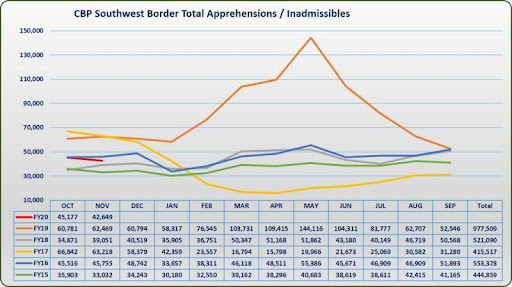 The most recent statistics regarding persons crossing the southwestern US border have been released. For the concerns of the Trump administration, the most important statistic is that border apprehensions have dropped very significantly.  From the dramatic surge during the spring and summer of 2019, monthly apprehensions are back in the historic "normal" level: The reasons for this are many and varied, but I would assert that the two primary factors are (1) a much tougher immigrant enforcement strategy by Mexico stopping many from reaching the US border, and (2) the harsh cruelty of US border policies including metering of asylum seekers at ports of entry, the Remain in Mexico policy, and increased detention of all other border crossers.   I don't think migration rates are going down because conditions are suddenly getting better for desperate peoples around the globe. For migration from the Northern Triangle of Central America, it is possible to do a deeper dive
3 comments
Keep reading

The witnesses of El Mozote

Thirty eight years ago today Salvadoran military troops moved on the area of El Mozote and surrounding hamlets in the department of Morazan in northeast El Salvador.  Over the next few days, with savage brutality, they would slaughter almost 1000 civilians, including more than 400 children under the age of 12, the worst massacre in the history of Latin America.  For many years in the English language press, only one witness to the massacre was referred to by name,  Rufina Amaya .   She was often described as the sole survivor, although there were others, but she told the story to the world for decades, including how she heard the screams of her children being murdered.  Rufina passed away in 2007. Today, a major human rights trial proceeds on a slow and steady pace in a courtroom in northeastern El Salvador. The trial has now brought us the testimony of other witnesses, primarily from the other hamlets surrounding El Mozote, who testify either to the killing, to the events lea
1 comment
Keep reading

Raising troops and prices for the coffee harvest

December 04, 2019
The coffee harvest is underway on the volcanic mountain slopes of El Salvador.  And for the coffee sector in El Salvador, there was some good news as world coffee prices have rebounded recently.  Coffee prices have jumped some 25% in recent weeks as smaller world supplies are forecast because of poor harvests in Honduras and elsewhere. The price increase represents a little bit of good news for the coffee industry in El Salvador which has been struggling in recent years.   Coffee exports from the country have declined by half over the past 10 years. Another factor challenging coffee farmers is extortion by the country's street gangs. Coffee farmers must pay protection payments to the gangs, or employ armed security to protect the harvest. It is a battle between coffee farmers and gangsters which can turn deadly. This year, the government rolled out a public security plan for the coffee harvest.  The government plans to send 3300 police agents and soldiers out into the coun
Post a Comment
Keep reading

Of foreign trips and transparency

December 03, 2019
Nayib Bukele traveled to Asia in the past week for state visits to Japan and China .  Under the FMLN, El Salvador dumped diplomatic relations with Taiwan  in 2018 and established them with mainland China.  Bukele said he'd review diplomatic ties when he became president, and on April 1, blasted China for extending an invitation to outgoing officials of the FMLN to visit Beijing. The visit to China would seem to go outside of Bukele's typical path of hewing to the desires of the US.   The US strongly criticized El Salvador when it broke off relations with Taiwan last year.   But Bukele is looking for investment partners wherever he can find them, and China remains interested in Central America.   In China, leaders of the countries announced that China will participate in infrastructure developments including a stadium and water treatment plant.    It is not clear if this is the same or different money from the $150 million China pledged to the FMLN government of Salvador
Post a Comment
Keep reading
More posts