Showing posts from August, 2015
Show all

Political parties agree to work together on public security

August 31, 2015
Representatives of El Salvador's political parties in the country's National Assembly signed an accord on Friday regarding public security.   In a rare moment of partisanship being set aside, the parties agreed to adopt measures which would improve the public security situation in the country. Among the items in the agreement, the parties agreed to work together in a spirit of respectful dialog: to fund the Plan El Salvador Seguro developed by the president's National Council on Citizen Security and Coexistence;  to strengthen the National Civilian Police and Attorney General on strategic approaches to the investigation and prosecution of crime;  to develop a mutual agenda of measures in the areas of economic growth, public finance, and citizen security; and   to adopt measures to effectively block cell phone signals from the leaving the country's prisons. The agreement has further commitments to adopt Plan El Salvador Seguro, as well as exhorting the new
1 comment
Keep reading

August 30, 2015
In recent weeks, El Salvador has seen a disturbing rise in threats and insinuations against those who would insist on exposing the truth, or advocating a path other than the government's open fire approach to combating the gangs: Journalists at El Faro have  received threats  and report being followed following their reporting on police abuses in torturing detainees and extra-judicial killings.   Some of the reporters for the periodical left the country for their own safety. Pastor Mario Vega of the ELIM evangelical mega-church in El Salvador announced that he had been receiving death threats  for his criticisms of the government's approach to policing as being ineffective.   Pastor Vega recently expressed his concern that a church evangelist had been arrested and held without charge because gang members attended a religious event she was holding in her house. The country's attorney general attacked church leaders in the IPAZ movement who have been vocal critics of
1 comment
Keep reading

The Attorney General and the Supreme Court

August 27, 2015
This week, the number of homicides for August  surpassed 700 , making this easily the bloodiest month in the bloodiest year since the end of the civil war.  It was a week which saw El Salvador's Attorney General Luis Martinez and the Constitutional Chamber of the Supreme Court making news related to the struggle to control gang-related violence. It's terrifying, but are gangs terrorists?   The Constitutional Chamber released a ruling which addressed issues surrounding a El Salvador's anti-terrorism law and anti-gang legislation.   According to the court's ruling, the warring street gangs can properly be called terrorists under the law, and  membership in the gangs alone is sufficient to be considered a crime.   The law should not, however, be extended to those who commit acts of protest, so long as the purpose was not the use of terror and violent acts.   The ruling said the government can properly prosecute those who was are financiers or apologists for the gangs, a
2 comments
Keep reading 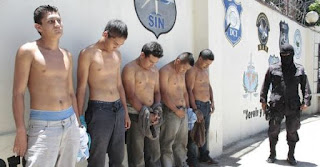 August 2015 is about to conclude as the month in which more Salvadorans died violent deaths than any other month since the end of the civil war in 1992 . The primary source of killing comes from the country’s powerful street gangs and the government’s heavily armed response to it. The weapons and the death toll resemble war, even if the gangs should not be mistaken for an army. I regularly am asked what the solution should be. I really have no basis to answer except as a longtime observer of these problems in El Salvador. I have no background in law enforcement or violence prevention. But with those caveats in place, I can also say that I have seen no evidence that anyone else making policy in El Salvador seems to have the solution either. What follows is my modest attempt to describe a path towards addressing the problems of gang violence in Salvador. It seems to be accepted fact that the top leaders of El Salvador’s rival gangs are all in prison. It also seems to be a
1 comment
Keep reading

Sending a colonel to Spain for trial in Jesuit murders

August 18, 2015
If you currently live in El Salvador and participated in the plotting and execution of the 1989 murder of six Jesuit priests, their housekeeper and her daughter, you have nothing to fear.  El Salvador won't extradite former military officers to Spain where a court proceedings are being held for the murder of those Jesuit priests, 5 of whom were born in Spain.   But former colonel Orlando Montano is not in El Salvador, but in custody in the US, and the US will likely soon extradite him to Spain as the AP reports : North Carolina is the unlikely scene of a court battle that could determine whether a former Salvadoran military colonel is prosecuted for the notorious slayings of Jesuit priests more than two decades ago during El Salvador's civil war.  An extradition hearing Wednesday for Inocente Orlando Montano Morales is the latest twist in a case that stretches back to 1989, when authorities say members of the military killed six priests and two witnesses. He is one of 20 fo
1 comment
Keep reading

August 16, 2015
The online periodical El Faro is protesting recent threats against its investigative journalists.   The periodical reports that threats have been received in comments posted on El Faro's website.  El Faro has asked the country's attorney general and security forces to investigate. According to El Faro, the threats appear to be linked to its reporting on human rights abuses committed by the police in their battles against El Salvador's gangs.  In the article  "Aquí ya no caben más: mátenlos" , an El Faro reporter described his observation of purported gang members receiving savage beatings within a police station.    In  "La Policía masacró en la finca San Blas" , El Faro reported on an anti-gang operation which initiated and gunned down multiple gang members but also killed innocent youth living in the same location.   Some of its journalists  left the country  following publication of the San Blas massacre piece for their own safety.   The award-w
1 comment
Keep reading

August 13, 2015
From InsightCrime.org Written by Written by Michael Lohmuller and first published here . El Salvador has invoked its anti-terrorism laws to prosecute alleged gang members -- raising the debate over definitions of crime and terrorism, where the two intersect, and the government's motives in framing the gangs as terrorist organizations. On August 11, El Salvador Attorney General Luis Martinez announced capture orders had been issued for approximately 300 alleged gang members on charges of “terrorist acts,” reported EFE . The gangs have “gone too far,” said Martinez. "They attack the police and prosecutors, intimidate the population, force people to leave their homes, and intend to destabilize the state. They are terrorists, not gangsters.” Martinez said applying El Salvador’s Special Law Against Acts of Terrorism -- on the books since October 2006 -- against gang members reflects a “new strategy” to “restore order and create social peace.” Under terrorism charges, g
Post a Comment
Keep reading

August 12, 2015
Several people have shared with me an article by Hilary Goodfriend published by The Nation on August 8 with the provocative title   How El Salvador’s Supreme Court Is Undermining Democracy—With Washington’s Help , and subtitled WikiLeaks has exposed US government collusion with the chamber’s destabilization strategy .   I have to respectfully disagree with the majority of the article. The US Embassy cable disclosed by WikiLeaks is not news.   El Faro first published the cable in 2011, four years ago.   This is not a brand new revelation.  The cable is dated July 2008, during the Bush administration, and before the Obama administration which has had a more even-handed approach to El Salvador's two political parties. Here is a link to the cable as published in El Faro, since the Goodfriend article does not link to the cable.  The cable talks about a "Plan B" by ARENA if it lost the 2009 presidential election to Mauricio Funes and the FMLN, which ARENA did.   Goodfrien
5 comments
Keep reading

August 10, 2015
In an address yesterday, Pope Francis stated : I am following with deep concern the news coming from El Salvador where recently the suffering of the population has worsened owing to the famine, the economic crisis, social clashes and growing violence. I encourage the beloved people of El Salvador to persevere united in hope and urge everybody to pray in order that justice and peace can flower once again in the land of the Blessed Oscar Romero.”  In the same address, after reflecting on the anniversary of the atomic bomb attacks on Hiroshima and Nagasaki, the pope stated: Above all, this sad anniversary urges us to pray and strive for peace, to spread brotherhood throughout the world and a climate of peaceful coexistence between peoples. May one cry rise up from every land, ‘No’ to war and violence and ‘Yes’ to dialogue and to peace.  With war one always loses. The only way to win a war is never to wage it.
4 comments
Keep reading

The aftermath of the gangs shutting down the transport system

August 08, 2015
The final days of July saw the bus system of greater San Salvador shut down as El Salvador's powerful gangs threatened death for any bus drivers who ventured out on their routes.   It was a powerful show of power by the maras .   And it has the country's government on the defensive to try and explain why the gangs seem ever more powerful and the toll of victims is ever increasing. Al Jazeera produced a video report with a good overview of the situation.   The Washington Post also tried to summarize the situation in a piece titled Driving a bus is a death sentence in El Salvador's capital city .    But if you read Spanish, the best analysis, as always, came from El Faro in an analysis by Roberto Valencia providing ten answers to help understand the bus stoppage.   Among the points made by Valencia: The stoppage was initially the product of all three main gangs, but after Tuesday, only the 18 Revolucionario gang was continuing to prevent buses from running.   (Most Eng
1 comment
Keep reading 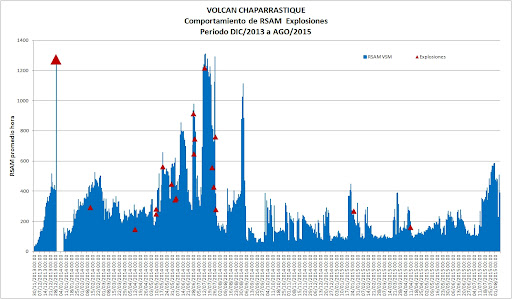 The Chaparrastique volcano near San Miguel continues to have elevated levels of internal seismic activity according to El Salvador's Ministry of Environment and Natural Resources .   The level has increased in recent months, although it is below the levels seen during much of 2014.   The volcano last had an eruption on December 29, 2013 which sent a large ash cloud miles into the air.  According to Salvadoran authorities, there has been a pattern of increased activity followed by small explosions as the volcano depressurizes.    On a recent trip to the area I could observe small clouds of smoke coming from the volcano's summit.    This may be the new normal for Chaparrastique.
Post a Comment
Keep reading 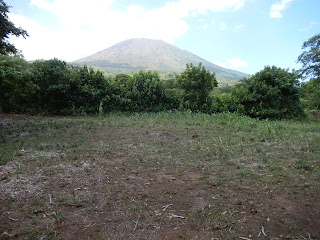 Three days ago I was with farmers in the eastern part of El Salvador on the slopes of the Chaparrastique volcano.   This year's drought has caused a loss of 80-100% of their corn and bean harvest.   They only hope now that the rains will come so there can be a second planting of the crops in August and three months of rain through the end of the rainy season in October.   They wait and pray.
Post a Comment
Keep reading
More posts