Showing posts from May, 2015
Show all

Reflections on the beatification of Oscar Romero 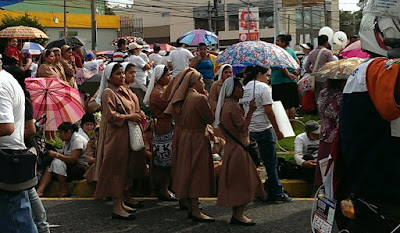 I had the good fortune to attend the beatification ceremony for martyred archbishop Oscar Romero celebrated by the Roman Catholic church in San Salvador on May 23.    Three of us stood with hundreds of thousands of Salvadorans in the streets surrounding Plaza Salvador del Mundo as the church held up the life and example of the bishop who was the Voice for the Voiceless.  As Carlos Colorado sums up in his blog : And then, there is the impression the event made on those who attended, and even those who experienced it remotely or learn about it later on.  The grandeur and spectacle of the event will loom large in the popular imagination.  It was, as presidential spokesman Eugenio Chicas said, “the event of the century” for El Salvador.  Little details, from the 30 minute-long procession of over a thousand priests and bishops entering the altar to the astonishing solar halo that dazzled onlookers by appearing precisely during the rite of beatification, seem to assure that the memory o
1 comment
Keep reading

May 20, 2015
The recent surge of deadly violence in El Salvador has caught the attention of the world's press.  More than 110 murders happened in the country between Saturday, May 15 and Tuesday, May 19.  The average during May exceeds 20 murders a day .   The greatest amount of bloodshed is occurring in the eastern part of the country in the departments of Usulután and San Miguel.   The only obvious response of the government has been to use more force, more militarization, and more aggressive tactics.   Those tactics have been met with equivalent escalations on the side of the gangs who war among themselves and against the police and armed forces.  This is the story being told in the world's press: El Salvador is on pace to become the hemisphere’s most deadly nation  -- Washington Post. Photo gallery  which accompanied Washington Post story. El Salvador gangs target police after failed truce -- Al Jazeera 250+ Gang Attacks on El Salvador Security Forces in 2015  -- InsightCrime
Post a Comment
Keep reading

Ten days are left before the beatification of slain archbishop Oscar Romero in San Salvador on May 23.   The beatification solemnities will occur at Plaza Salvador del Mundo in an event to be attended by Roman Catholic cardinals, bishops from 15 countries, as many as nine presidents and heads of state, thousands of Catholic priests and hundreds of thousands of the faithful. The beatification events have their own website here with versions in both English and Spanish with the public, and some might say watered down, presentation of what Romero's beatification is all about. To get a feel for it, you can watch this  video spot  or listen to the beatification  jingle . To host the beatification mass and all of the visiting bishops and VIPs and priests, the plaza is being converted into a massive outdoor worship space: Click on image for a larger version. Estimates of how many people will attend have ranged from 260,000 to 500,000 or more.   No one really knows.
Post a Comment
Keep reading

2015 election is finally over in El Salvador

May 13, 2015
El Salvador's 2015 national elections have finally concluded.   The recount of votes for National Assembly in San Salvador that had been ordered by the Constitutional Chamber finished at last and the court lifted its ban preventing deputies from San Salvador taking their seats .   Although the recount produced an increased vote count, the results did not change any of the seats awarded in the original tallies. The election mess this year has produced legislative attempts to reign in the power of the Constitutional Chamber.   The court started by requiring that cross-party voting be allowed in this election, then refused to delay the effective date of its ruling until the 2018 elections, which led to the court requiring a manual ballot-by-ballot recount in San Salvador, and then ordering all deputies from San Salvador not to take their seats for almost two weeks until the recount was done.   While the Constitutional Chamber should be respected for its actions to protect individual
Post a Comment
Keep reading 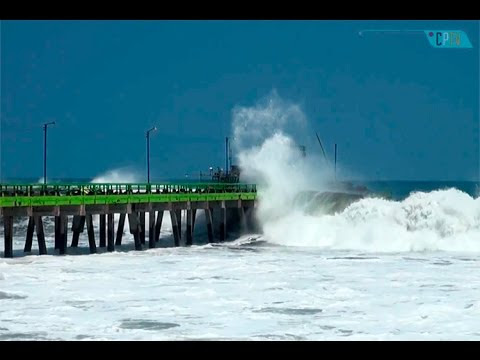 View image | gettyimages.com The weekend of May 2-3 saw tall and fast waves crashing into the Salvadoran coast.   The waves caused considerable damage to the pier at the city of La Libertad, and to many of the small cafes and other establishments along the country's Pacific beaches.   Similar conditions are now expected to return on Wednesday, May 13. The waves battered coastal areas up and down the Pacific coasts of the Americas from Mexico to Chile.   As one site reported , the swells which crashed against the shores had been generated by storms in the middle of the Pacific: The storms originated near the International Date Line and included sustained winds of 50-60 knots (93-111km/h), creating a massive swell that surprised residents in coastal regions fringing the eastern Pacific....   “It shows huge waves can be generated quite some distance away,” said Alex Zadnik, a meteorologist with Weatherzone, who has surfed at the Mexican beach. “The weather conditio
Post a Comment
Keep reading

May 10, 2015
This week El Salvador's Ministry of the Treasury issued a first of its kind report  listing the corporations and the persons owing the greatest amounts in back taxes to the Salvadoran government. ContraPunto summarized what the report revealed: Well known businesses in electric power, banks, telephone companies, insurance companies, drug stores, department stores, and airlines among others are among those who owe taxes to the government according to the list published by the Ministry of the Treasury.  On the list you can find big businesses like CAESS [power utility], Citi Bank, Azteca bank, Santa Lucia drug stores, Telemovil, Digicel, TACA [airline], Siman [department stores], Channel 2, and other companies and individuals totaling 12,519 taxpayers who owe the state more than $372.6 million. Publication of the list led many civil society groups to note that it would be much easier for El Salvador's government to make the investments to reduce crime which business intere
Post a Comment
Keep reading

May 06, 2015
The headline in an Associated Press article today was El Salvador families abandon homes following gang threats . The story stated: More than a dozen families have abandoned their homes in two rural communities following threats from gang members, police in El Salvador said Wednesday....  Residents loading their few possessions into trucks on Tuesday declined to give their names out of fear. They said gang members had gone house to house threatening families.  The move comes after four members of one family were killed on April 27 in a turf battle. Some families said that even with police present they no longer felt safe. The story is tragic, but it is incredibly common now in El Salvador.   A week ago I was in El Salvador when members of a family I know well called on the phone to say that gang members had burst into their house in the middle of the night, beat up women in the house and threatened the family.   Now that family has fled to spend their nights in another community
Post a Comment
Keep reading

May 04, 2015
Former mayor of New York turned public security consultant Rudy Guiliani came to El Salvador today to describe his consulting firm's analysis of El Salvador's violent crime problems and proposed solutions. His remarks were made at a gathering of the National Association of Private Enterprise which has sponsored his consulting work in conjunction with President Sanchez Ceren's Citizen Security Council.  Guiliani spent a lot of time talking about how crime was reduced in New York City and Colombia, and asserting El Salvador could do the same.   Guiliani remarked that El Salvador needed a single-minded focus on disrupting the control of neighborhoods by gangs through vigorous law enforcement, long prison sentences, and prisons which actually prevent gangsters from continuing to commit crimes from within. The entire conference is recorded here , and Guiliani's remarks begin at 4:14:00 in the video (which has somewhat poor audio quality and switches to Spanish dubbed tran
1 comment
Keep reading 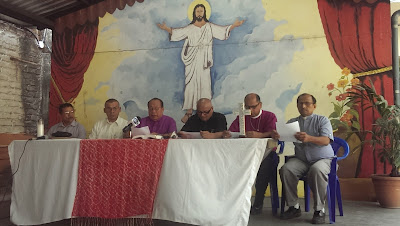 Salvadoran church leaders who are part of the Pastoral Initiative for Life and for Peace (IPAZ) held a press conference, on Wednesday, April 29,  to advocate for dialogue in the face of growing violence in the country.   IPAZ called for a process of national dialogue, including dialogue with the country’s gangs, as the only path forward to achieve peace in the country afflicted with so much violence. Text of IPAZ press release . The IPAZ press conference followed a week after a joint communique purporting to come from the imprisoned leaders of the country’s largest gangs was released to the public.   The statement indicated agreement to a 26 point “peace process” proposed by Raul Mijango, one of the mediators of the original truce, including the gangs’ agreement to unilaterally reduce the level of violent acts being committed against the population, including attacks on the police and military. According to a person with knowledge of the process, Raul Mijango has been talkin
Post a Comment
Keep reading
More posts